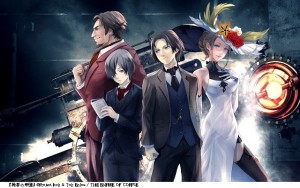 The movie Empire of Corpses, which had its world premier outside Japan in the Glasgow Film Theatre on Sunday 11 October, had everything that attracts me to anime in insane profusion: a vast sprawling plot, an ornately beautiful cataclysm at its climax, an impenetrable philosophy which inexplicably roots itself in your mind for days afterwards, and a magnificent soundtrack. That these elements don’t really cohere – there are gaping plot holes which one can only ascribe, like the holes in Takashi Nakamura’s Tree of Palme or Katsuhiro Otomo’s Steamboy, to the likelihood that it has been cut down from an even vaster and more insanely ambitious director’s edit – hardly diminishes its attractions. And it made me think quite hard about two things: the powers that drive the subgenre called Steampunk and the passionate love affair between anime and books.

The first of these is something many people have written about, but Makihara’s film drove it home to me: how well Steampunk is named, since the term for the genre incorporates the energy source of an era. Steam isn’t always, though, as central to the plot of a Steampunk narrative as it is in Steamboy, which is full of massive metal components being propelled at appalling forces in all directions by compressed superheated water vapour, to devastating effect on the London landscape. Indeed Adam Roberts’s novel Swiftly, which takes as its premise the notion that all the lands discovered by Jonathan Swift’s egomaniac traveller Lemuel Gulliver have been colonized by various global empires, contains no steam at all. Why invent the steam engine, after all, when you have Brobdingnagians to lift your heavy loads, Lilliputians to do your delicate work, and Houyhnhnms and Yahoos to stock your armies? The power that drives the British Empire in Roberts’s mid-nineteenth century is slavery, and the pattern of the enslavement of smaller species by larger ones – and of more or less organized rebellion against oppression – seems to be repeated throughout the physical universe.

In Empire of Corpses the empires of the world are powered by the dead. Soulless hordes of staggering zombies have replaced the working classes as the components of every industrial enterprise and imperial war machine on the planet. What has become of the actual working classes we aren’t told, but by the middle of the movie it seems distinctly probable that they have been turned into zombies before death, through the horribly aggressive method, depicted in the movie’s opening shots, of inserting an oversized syringe into the brainstem – thus overriding their personalities with an artificial compound of music and opium (a witty take on Marx’s famous conflation of religion with a hallucinogenic drug). The premise satisfies because it brings together a number of themes associated in viewers’ minds with the nineteenth century: decline of religious faith, religious and moral hypocrisy, alienation of labour, men conceived as mechanisms, a morbid fascination with mortality, an inhuman ruling class who preach the highest ideals (one especially ambitious proponent of zombyism insists that filling the world with walking dead will bring universal peace at last – an assertion it’s hard to deny). And the fact that the movie’s central character shares the imperialists’ obsession with reanimating corpses for what may well be entirely selfish motives is equally satisfying. John Watson – yes, that John Watson – is literally hell bent on restoring his dead friend Friday to life; and his exploitation of Friday’s zombiefied corpse as a servant, bodyguard and amanuensis while ostensibly working for his benefit makes a neat point about the ease with which selfless high ideals can mutate into a cover for self-interest – a situation Makihara implicitly extends to the whole of the British Empire (and every other imperial power) in this movie.

But Empire of Corpses also reminded me of anime’s love affair with books, and that’s what lingered in my mind after the end credits (which are well worth watching to the end – Japanese audiences, I’m told by my colleague Saeko Yazaki, consider it rude to leave the cinema before the screen goes blank). Not only is the film stocked with literary figures – John Watson, Friday from Robinson Crusoe, the brothers Karamazov, Captain Nemo (or at least his ship), Mary Shelley’s eloquent creature (as well as James Whale’s dumb one, who unaccountably makes an appearance towards the end) – but the plot is unabashedly literary in character. The quest throughout is to recover Victor Frankenstein’s lost notes, which are said to contain the secret for reanimating the soul as well as the body – thus enabling zombies to speak, as Friday cannot. The villain – James Bond’s M – aims to overwrite the minds of the intransigent subjects of the British Empire with a more docile model of consciousness; in other words, he’s more interested in soulless zombies than articulate creatures of the sort Frankenstein created. Watson, by contrast, hopes to find a way to overcome Friday’s muteness by having him write down everything that happens to him as the two of them traverse the globe in search of that earlier set of notes. Dead Friday, then, writes living Watson; M seeks to rewrite the imperial citizen as a docile animated corpse; Frankenstein’s creature seeks to rewrite the android woman with the consciousness of his uncreated bride – acts of writing, over-writing, co-writing and rewriting fill the plot, till one could be forgiven for losing track of the characters’ motives altogether.

All these acts of posthumous writing and rewriting are rendered poignant by the fact that this movie is an adaptation of the last novel by Satoshi Ito – Project Ito – who died of cancer while writing Empire of Corpses, leaving it to be finished by his friends. The clearly homoerotic relationship between Watson and Friday – which precedes his quasi-homoerotic relationship with Sherlock by a decade – looks like a passionate tribute to a much-loved writer by friends and fans, who are determined to continue his project in spite of his death (there are two more full-length animes planned, which will make this movie into the first part of a trilogy). Indeed, one could say that this bid to film Ito’s work is powered by his death, lent passion by it; the zombie empire in the film can be read as a metaphor for grief, which so easily becomes a struggle to keep a lost one’s memory alive, to defy death’s tyranny, to promote the words that are all that survive of a writer’s mind after her demise. Reading a dead writer’s words is an act of reanimation, and this film indulges in this particular form of Frankensteinian re-creation with flamboyant enthusiasm.

Of all forms of film, anime is perhaps the one that’s most obsessed with books. It’s not just a matter of the dozens of adaptations of novels with which it’s stocked, from Isao Takahata’s TV series Heidi, Girl of the Alps to Hiromasa Yonebayashi’s Arrietty, from Satoshi Kon’s swansong Paprika, based on the novel by Yasutaka Tsutsui, to Nakamura’s post-apocalyptic versions of Pinocchio (A Tree of Palme) and Peter Pan (the TV series Fantastic Children). There are also the shows that dramatize the love of books itself, such as Koji Masunari’s OVA Read or Die (itself adapted from a series of light novels), featuring a bespectacled, shy librarian with superpowers that enable her to make anything out of paper, from full-size planes to bullet-proof shields; Mizuho Nishikubo’s Giovanni’s Island, in which two young brothers are sustained through the Russian occupation of their island home by their passion for Kenji Miyazawa’s novel Night on the Galactic Railroad; or Yoshifumi Kondo’s masterpiece Whisper of the Heart, whose heroine finds herself drawn to a boy in her high school by their mutual love of reading. Hayao Miyazaki (who scripted Whisper and Arrietty) is famously literary in his inspirations: Treasure Island underlies Laputa: The Castle in the Sky, Andersen’s Little Mermaid haunts Ponyo, while the success of his adaptation of Howl’s Moving Castle added insult to injury when his son Goro enthusiastically mashed together the Earthsea books in the critically panned Tales from Earthsea (for which I have a not-so-sneaking admiration). The labour of drawing characters, backgrounds and successive frames by hand for animated movies seems to yoke them to other forms of visionary, labour-intensive activities such as those of the solitary novelist, the mangaka or the attentive reader. 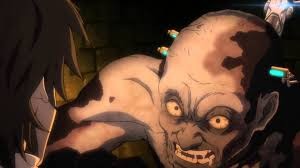 Reading and writing have never been more violent than in Empire of Corpses, nor so perversely erotic. I say ‘perversely’ because the central character has necrophiliac tendencies, which finally find an outlet in his willingness to embrace corpsedom himself (no spoilers here) to get close to his departed friend or lover. Is the film suggesting that reading books by dead authors (and Friday becomes a dead author by virtue of his note-taking) is, like orgasm, a kind of death? It certainly seems to suggest that encountering the past through books resembles a battle with enraged zombies – an idea which surely has some weight in these zombie-obsessed early decades of the twentieth century. The film’s greatest perversity, though, is the absence of female characters. The only prominent woman in it is an android with outsized breasts who spends half her time wielding a flamethrower and the other half flailing around in agony as Mary Shelley’s creature strives to convert her into a vehicle for the resurrected soul of his lost bride. There are some Victorian imperialist attitudes that aren’t worth reviving – and others that have shuffled on into the twenty-first century, gnashing their corpselike teeth in a vain attempt to fend off the forces of feminism. A shame that this film chooses in the end to align itself with the latter.

9 thoughts on “The Empire of Corpses by Ryotaro Makihara”