[This is the second of three short stories playing variations on the theme of the old fairy story of Childe Roland and Burd Ellen. The first variation should be read first, and can be found here. The third and final variation is here.] 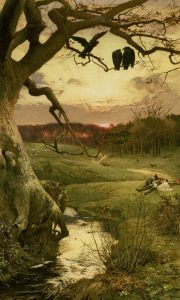 Tremors shook the earth each time his younger brother swung his sword and sent a head flying: the thump of the severed head, followed by the heavier thump of a headless body on the stony ground. Hector’s roots detected the tremors from each double thump and carried them up through his slender trunk into the branching channels of his thirsty brain. He’s coming, the tremors whispered. He’s coming to save us: Roland the assassin, Childe Roland with the killer’s eyes and the heart of steel. Hector spread the roots of his toes, feeling for additional clues as to Roland’s whereabouts. He’s coming quickly.

The henwife. The child was approaching the henwife’s hut, and he was tired.

Alexander, now. Roland was surely no Alexander. The eldest brother had only got as far as the henwife’s hut before he succumbed to the lure of mercy. The instructions had been unambiguous – kill everyone you meet in Elfland by decapitation – and Alexander had known full well what would be the consequence of failing to follow them. He had heard the stories, had told them himself in the winter evenings by the fire, his harp trilling out the tunes that gave them life and fixed them in the memory. But knowledge is one thing, acting on it quite another. The henwife had undone Alexander, with her crinkled face and the quizzical look that came into her eyes when he raised his sword.

In retrospect it seemed inevitable. How could Alexander have possibly killed the henwife, that inexhaustible fund of the songs and stories that filled his dreams and his waking hours? As soon kill his mother, his aunt, his gran, the wizened old wives of the mountain village who had taught him all he knew and felt. As soon kill himself…

And kill himself he did, at least as a person of any importance or potential. Now Alexander’s claws gripped Hector’s branches, as the bard now bird hopped aimlessly through the tangled thicket of his brother’s thoughts. Gripping branches was his only form of language. He couldn’t speak or sing or play, only croak like a toad and dance his ungainly dance when the wind got up and the rowan swayed, gripping and releasing each branch in turn as he hopped round the crown of the tree in an endless circuit. The elves were both cruel and cunning in the punishments they meted out for disobedience.

Hector, on the other hand – the second brother, now the tree – Hector was made of sterner stuff. Or so he had thought. He had killed the henwife, just as he’d killed the goatherd and the tinker and the tinker’s dog. He’d killed the tinker’s dog because it barked at him, though the old man had never said anything about beheading dogs or birds or insects. After that, Hector had made it all the way to the Tower itself, to his own amazement. He had blown the slug-horn at the door, seen the girl run out. Even now he remembered the sense of exultation he had felt as she ran towards him, because he too had heard the stories, had known from the start that he’d have no chance if he entered this one. The eldest brother sometimes prevailed, the youngest brother often, but the middle brother never, not in any version of the tale he had ever been told. He had had no chance at all; yet he’d reached the Tower, and here he stood, the conditions fulfilled, the last test passed, his sister running towards him. Against all odds he had won her back. In his triumph he dropped the sword, stretched out his arms to catch her shoulders, laughed and cried. And even as the sword hit the ground he had felt the changes coming over him.

His boots split open. His toes burst wriggling out and started to burrow into the earth, like eels burrowing into the rotting carcass of a long-dead horse. His arms forked and forked again, each bifurcation wrenching apart the bones and sinews. His head split open, too, sending tender new twigs of thought in all directions. The last thing he saw, as the bark spread over his eyes, was the look of horror on his sister’s face as he exploded into vegetation. There had been plenty of days since then to remember that look, as he stood by the entrance to the Tower, a rowan rooted among the rocks with a useless raven hopping around in its leafless branches.

There had been plenty of time, too, to think about where he had gone wrong.

Kill everyone you meet in Elfland, the old man told him. Not every elf, as Hector had assumed. Kill everyone you meet in Elfland, without exception. For Hector, Burd Ellen had after all never really been in Elfland – she had come here under duress, she belonged in the fields and woods and hills of Dad’s estate. That was his assumption, based on a particular understanding of the riddling words of bards and elves. But he had been wrong, for all his wiliness (he was the wiliest among the brothers, the middle brother nearly always was). And now…

Here came Roland, the youngest brother, a child of twelve, armed with the same instructions, the same riddling words. He too didn’t stand a chance. For one thing, he was carrying the oldest sword, the rusty one from the back of the stables. His body and limbs were unprotected by cold steel, because there had been no armour in the house small enough to fit him. How to warn him? How to let him know? It couldn’t be done. A tree has no voice, or what voice it has is only borrowed – the hissing of leaves in an autumn wind, the creak of branches under the weight of a late spring snowfall – and is in any case only available at certain times not of its choosing. No hope of warning there. But the bird? It’s a bird of omen, the raven, isn’t it? Couldn’t Alexander give some hint at the old man’s trickery?

Could Alexander save Childe Roland, absent-minded, gullible old Alex with the misty eyes?

From the feel of its claws, the raven was jumping up and down in agitation, croaking no doubt if Hector could have heard it. Flapping its wings as well, no doubt, to attract attention. He could sense it in the thicket of his mind, jumping up and down, letting out a stream of husky croaks at various pitches. Pathetic, really. The boy wouldn’t see the bird in a month of Sundays. Childe Roland only ever had eyes for the task in hand, he couldn’t be distracted, that was the measure of his coldness. Nothing short of a peck on the ankle would get his attention, and then it was likely enough that the boy would strike, with deadly accuracy, at the raven’s head, with his rusty sword, and that Alex would lose his life all over again.

There was nothing his brothers could do to help the youngest.

And now the footsteps, pounding, pounding on the granite flags of the Dark Tower’s floor. Coming closer at frightening speed. Out into the open. He could feel her presence now through his silvery bark: a kind of glow, like the touch of the sun on his woody skin in the early evening. She had stopped in front of Roland. The child must be looking her up and down with his killer’s eyes.

The child would strike.

And suddenly Hector lost all doubt. The child would strike, it was who he was, it was what he did. Childe Roland had known, from the moment the old man issued his grim instructions, what to do, and had known too that he could do it, that he alone of Ellen’s three brothers had the eyes, the arm, the steel-cold stomach to complete the mission. This was what the boy had been born for, after all: to make up for the fatal flaws of his older siblings. Everything would be all right. The boy would strike, and the head would roll.

Hector held his breath, or would have held it if he’d been human. Instead he stood tall and slim and graceful, waiting for the blow and the double thump.

A thump. The ring of steel. In two or three seconds, the louder thump of the headless body on the stony ground…

But the second thump – it never came. Slowly it dawned on the waiting Hector that the weight and texture (so to speak) of that first thump did not in fact tally with the weight and texture of a severed head. The boy hadn’t struck. Instead – it was obvious now – he had dropped the sword, the rusty sword from the back of the stables. He had dropped it; and now another light thump sent new vibrations through Hector’s roots.

Could it be possible? Had Roland dropped to his knees? Was he crying, for the first and only time in his life?

A wave of relief ran through Hector’s body, from the tips of his roots to the topmost twigs of his forking arms and his branching mind. A gust of warmth, a tremor like an earthquake, as if instead of the Dark Tower the slender rowan that had once been Hector, the second brother, were about to suffer a fall. A happy fall, from the topmost pitch of expectation to a new understanding of the world his brother lived in.

Childe Roland had not struck. The boy was human, after all.

And then a wave of cold, from roots to twigs and back to roots: Childe Roland had not struck. Burd Ellen was doomed.

There was no one left to save her. No one left to defend her person, body and soul, with a ring of steel. No armour, swords, or warriors. The girl was doomed, and her house was too.

A strong wind blew in from the west. It brought a spray of brackish raindrops tinged with spume, and the cries of lonely seabirds, cold and far, as if they were mocking the perpetual cycles of human grief.

The tree bent before the wind, its grey bark darkening as the raindrops lashed its trunk. For an hour or so it tossed back and forth, but it wasn’t uprooted. Rowans are resilient, despite the shallowness of their roots.

When the storm was over the tree grew still, and the three ravens on its branches relaxed their grips and began to look with caution about them.

They were getting hungry. They had no idea when they had last eaten, and it seemed to them that there was plenty of carrion nearby. 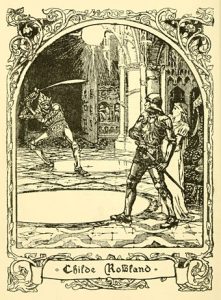 [The third and final variation on the Dark Tower theme can be found here.]