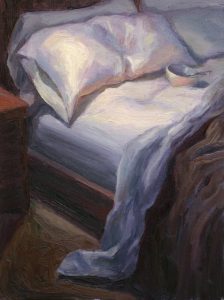 One morning, Mr McGhee rolled over in bed and refused to get up.

‘Are you all right, love?’ asked his wife. She shook him a couple of times, then went to phone his work.

‘No I’m not,’ said Mr McGhee through the open door of the bedroom. ‘I’m just not getting up. I’m never getting out of bed again.’

As word spread about Mr McGhee’s decision he became something of a celebrity. A piece appeared in the local paper. A national magazine ran a feature on him. A TV crew came to film him where he lay among stacks of empty pizza-boxes and buckled beer-cans. The longer he stayed in bed the more elaborate and satisfying reasons he found for doing so.

‘It’s a good bed,’ he said. ‘My grandfather and great-grandfather were born in it. Most of our dreams are dreamt in bed, and sex is best between the sheets. It’s nicest to have breakfast in bed, or tea in bed while watching TV. If more people stayed in bed there wouldn’t be so much greed and violence in the world. I like my bed, and all the evidence suggests that my bed likes me.’

His neighbours regarded him as something of a hero. After he’d been in bed a year they threw him a party, to which the lord provost and most of the councillors were invited. A piper serenaded him outside his bedroom window, and the bedroom became an Aladdin’s cave of unlikely gifts: porcelain figures, footballs, garden furniture, and every kind of spare part for his car. There was a cake with a single candle, and a lot of cards wishing him either ‘Happy Anniversary’ or ‘Get Well Soon’.

For a while after that a volunteer came round with meals on wheels. Then the day came when the service was discontinued. ‘You’ll have to get up now, Mr McGhee,’ said the cheerful official who brought him the news. ‘The trouble is, you’re not an invalid, so you don’t qualify for government aid. There’s nothing we can do to help you. You’ll have to get up or starve.’

Mr McGhee warmly agreed with the official, and began to starve to death almost at once. As day followed day he got thinner and thinner, till one morning two of his neighbours wandered in and found that he seemed to have stopped breathing. When they moistened his lips with a little beer he revived and asked for a slice of toast. So they phoned the district councillor, and after a short debate, responsibility for feeding Mr McGhee was resumed by his former employers, the city council.

Five years later he was interviewed again by the same TV crew as before. He had stopped shaving and his beard had grown into a thick forest at one end of the rugged landscape of his continental quilt. The quilt had developed growths of its own: fungal blossoms and several varieties of moss that throve on a diet of rotting feathers and liquid secretions from his body.

‘Do you miss anything?’ they asked him. ‘Do you regret your decision? Don’t you think it’s irresponsible to stay in bed when there are so many people in the country with genuine disabilities?’

‘They have their reasons for staying in bed; I have mine,’ he answered sagely.

‘Sometimes,’ he admitted. ‘But on the whole that’s balanced by the memory of what it was like before I started to sponge. I can live with the guilt, I think.’

After that people forgot about Mr McGhee and his gesture of defiance. The delivery of meals on wheels became erratic. His neighbours no longer visited. Only his wife came in from time to time with a bag of this or a basket of that, but she refused to do so regularly. ‘You made your decision, I made mine,’ she said, and Mr McGhee warmly agreed.

One morning he found he couldn’t sit up in bed. He lay flat on his back for three days and three nights till his wife dropped by. She took one look at him and phoned the doctor, a call that had been delayed by fifteen years.

‘Your husband has had a stroke, Mrs McGhee,’ said the doctor.

‘Not Mrs McGhee. Ms Winkelmeyer,’ said the ex Mrs McGhee. ‘He needs to be treated in this bed. He can’t be moved.’

‘That’s just as well,’ said the doctor. ‘These days we prefer to treat our patients at home. The hospital wards have all been converted to suites for private patients. I’ll send some nurses over.’

Several weeks passed before the nurses arrived, and in the meantime Ms Winkelmeyer cared for Mr McGhee with dispassionate assiduity. The nurses, when they came, were big burly men with hairy chests bursting out of their green cotton blouses. ‘How are we today?’ they said to Mr McGhee as if he had suddenly turned into a roomful of people. Then they helped him to move his limbs, to sit up in bed, to raise his arms and legs one by one and flex them. These movements caused him excruciating pain. ‘That’s very good,’ they said. ‘Tomorrow we’ll begin speech therapy.’ They left him looking grey with agony, trying to swallow a pill.

Next day, as promised, the nurses began speech therapy. ‘Talk,’ they said, and slapped his cheeks. He rolled his eyes and laboured with his tongue, but no matter how he tried he could only manage to let out a few feeble screams when they slapped him. ‘Very good,’ they said again. ‘We’re doing very well. Tomorrow we’ll try walking.’

Mr McGhee shook his head and Ms Winkelmeyer protested, but the nurses were firm. ‘We mustn’t be lazy,’ they insisted. ‘A walk will do us good.’

Next day they ordered Mr McGhee to stand up. When he shook his head, they seized him by his skinny arms and swung him round so that his little withered legs were dangling over the side of his great-grandfather’s bed. All at once he spoke to them clearly.

‘Nothing you can possibly do to me,’ he said, ‘will make me take one step.’

‘We’ll see about that,’ said the nurses, pulling him upright.

He gave a terrible shriek, and died.

‘Poor soul,’ they said as they laid him on his quilt. ‘Still, at least he’s now at rest.’

His funeral was attended by an enormous crowd. As it turned out, Mr McGhee had bought shares in the successful Dreamboat Mattress Company and become fabulously rich, though he had never seen fit to mention this to anyone. He left his fortune and his bed to his ex wife.