A few months back I wrote a post on Alasdair Gray. Among other things I mentioned a note he wrote me about the writer-artist Alfred Kubin, which at the time I didn’t have access to because it was locked away in my office at the University of Glasgow, being protected from Covid like the rest of us.

In recent weeks I’ve been able to get back into my office and have been ferrying things back and forward between there and my Glasgow flat. Among other things I ferried my copy of Alfred Kubin’s fantastic novel The Other Side (1908), and when I opened it I found the note I mentioned in the earlier blog post.

My edition of the novel is from 1967, and was published by those friends of the fantastic Victor Gollancz Limited. Here it is with its handsome dust jacket: 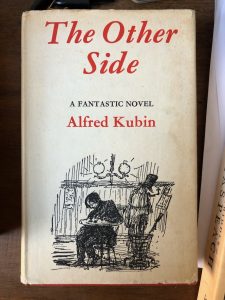 As I said in that earlier blog post, this book was first recommended to me by my tutor Christopher Butler, as a superior alternative to the work of Mervyn Peake. Needless to say I couldn’t agree with him on the matter of its superiority, though I found it fascinating, as Kafka did apparently.

And here’s the note, written in Alasdair’s inimitable hand. A transcript follows. 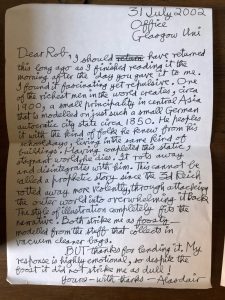 I should have returned this long ago as I finished reading it the morning after the day you gave it to me. I found it fascinating yet repulsive. One of the richest men in the world creates, circa 1900, a small principality in central Asia that is modelled on just such a small German autocratic city state circa 1850. He peoples it with the kind of folk he knew from his schooldays, living in the same kind of buildings. Having completed this static, stagnant world, he dies. It rots away and disintegrates with him. This cannot be called a prophetic story since the 3rd Reich rotted away more violently, through attacking the outer world into overwhelming it back. The style of illustration completely fits the narrative. Both strike me as foosty – modelled from the stuff that collects in vacuum cleaner bags.

BUT thanks for lending it. My response is highly emotional, so despite the foost it did not strike me as dull!

Yours – with thanks – Alasdair

I loved that sentence about the stuff that collects in vacuum cleaner bags. Here’s an example of what he’s talking about: 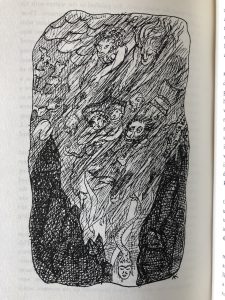 As a contrast, here’s the Handbook Alasdair designed for the then MPhil in Creative Writing when he was Professor at the University of Glasgow. Look at those clean lines, and the arrogant power of that writer-artist-lion, with his back foot grasping a mouse, his tongue reaching out to lick the quill. No wonder Gray felt sick at the sight of foostiness: