And now I’ve finished the epic journey from Upmeads to Utterbol, as recounted in The Well at the World’s End. 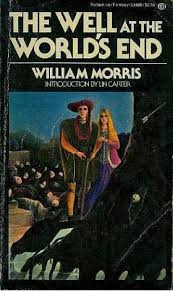 For a long time this was a book I shunned because of its style. I didn’t like what I took to be the fake medievalism of it, preferring T. H. White’s decision to modernize comprehensively, or Tolkien’s ingenious technique of seguing into medieval language by careful stages. But the language of fantasy has interested me for a while now, and the various revivals of early English in major fantasy texts – from William Hope Hodgson’s bizarre take on it in The Night Land, with its endless and inexplicable use of infinitives, to E. R. Eddison’s baroque mannerisms in The Worm Ouroboros – now seem to me to be an important part of their ingenuity and charm. Morris is an expert user of late Middle English, steeped in Chaucer and Malory (as his Kelmscott editions of those writers show), and one of the reasons he chose it for his romances may have been to make a point about how he was disrupting both Victorian and Medieval conventions as he wrote. For instance, he would have known that the second person singular, ‘thou’, was used in Medieval times to signify familiarity, and never for formally addressing one’s social superiors. So when woodsmen, bandits, shepherds, merchants and craftsmen persistently address Ralph of Upmeads as ‘thou’ they are asserting the dignity of their social positions by addressing him as an equal. And he would have known that Ralph’s habit of addressing men and women of all classes with the elaborate tropes of chivalric courtesy – along with his decision to marry a cross-dressing innkeeper’s daughter rather than a princess – signals his acquiescence with their egalitarian assumptions. At the same time, Morris’s use of outmoded language meant he could imitate certain Medieval attitudes to gender and sexuality rather than Victorian ones – Malorian attitudes in particular. As Helen Cooper has shown, Malory didn’t tend to condemn women for showing desire – witness the fair Maid of Astolat, or Lancelot’s lover Eleanor, or even Guinevere. That Morris recognised Malory’s interest in and sympathy for women is demonstrated by one of his earliest poems, ‘The Defence of Guenevere’, which takes a radically different view of Lancelot’s royal mistress than Tennyson did in The Idylls of the King. So the choice of Medieval language may have been partly intended to liberate Morris to write about desiring women without arousing the wrath or distaste of his contemporaries; and he seized this opportunity in The Well at the World’s End in a big way.

That’s what struck me this time I read it – I think because between this reading and the last I’d read Morris’s brilliant feminist fantasy, The Water of the Wondrous Isles. That book has a female protagonist – the first and last in epic fantasy before the work of Patricia McKillip in the early 70s, I think, though I’d be happy to be proved wrong (it partly depends on your definition of epic fantasy, of course). So I knew he was a champion of women’s empowerment, in theory at least, and that he could write magnificently about female desire. Re-reading the Well, I was bowled over by the centrality of women to it. In fact, for most of the romance the male protagonist, Ralph, does almost nothing of his own volition – he’s sent out on his quest by one woman, furthered in it by another, and enabled to complete it by a third, and he encounters numerous other remarkable women along the way. And Morris’s representation of them follows the path he trod in ‘The Defence of Guinevere’, making heroines of women who in other writers’ hands – writers of both sexes – in the 1890s would have been dismissed or condemned without a moment’s hesitation.

The first is Ralph’s ‘gossip’ or godmother: a merchant’s wife old enough to be his mother, gifted with second sight, and deeply in love with her godson – while fully conscious of the impossibility of that love being consummated, given the disparity between their ages (disparity of stations is barely mentioned), and the fact that she already has a loving husband. Her love for him is clearly sexual in nature, yet it is neither condemned not mocked by Ralph or the narrator. More remarkably still, the woman’s husband is fully aware of it, and doesn’t suffer from jealousy; instead he does everything in his power to satisfy his wife’s wish to spend time in Ralph’s company and to ensure the young man’s wellbeing. I can’t think of a three-way relationship quite like this in literature – let alone Victorian literature, which would tend to make the desiring older woman either comic or monstrous.

The second woman is even more remarkable as a heroine figure. She’s richly ambiguous, being adored by men and loathed by women – largely because women know that no man, including their lovers and partners, can resist her. Like the merchant’s wife she’s much older than Ralph and married to another man, but this doesn’t stop her choosing to become his lover. She has magical powers, has ruled as a queen and leads a band of outlaws like Robin Hood’s; she is also a kind of goddess figure to an isolated community, their ‘Lady of Abundance’ whose appearances are said to bring fertility to the land. She is loathed by many of the clergy, though many others desire her as much as their secular male counterparts. Each of these things individually would have earned her the name of a wicked enchantress in another narrative. In this one, she remains the presiding genius of the book, even after her death; the standard against which every other character is measured. One way in which she serves as such a standard is the extent to which she has been slandered and abused in the course of her long life; the impression one gets is that she has been driven to acts of violence and treachery by the violence and treachery of the men who surround her – so she is a living witness to the corruption of the violent, patriarchal world through which Ralph is travelling. But remarkably, she also becomes the architect of its transformation. Both before and after her death (sorry for the spoiler) she sets Ralph on the track to the Well, and to the relationship with a third woman that will make a decent man of him.

The third woman, the cross-dressing Ursula, could be said to be a safer alternative than the Lady of Abundance as a lifelong companion for Ralph to settle down with. Given that she is effectively bequeathed to Ralph by the dying Lady, one would expect her to be a feeble, conventional being, fit only to be rescued from frequent deadly perils and comforted in adversity. One would expect her to be dully chaste, bereft of desire except of the most decorous kind, and to be willing to submit to Ralph in every situation. In fact, she’s nothing of the kind. She dresses in armour, watches over the sleeping Ralph with her sword unsheathed, frees herself from the tyranny of Utterbol (Ralph never even gets there, despite his plan to free her), and saves Ralph’s life when they reach the terrible Dry Tree. After the couple drink from the Well she settles into a more conventional role – she is even rescued at one point by Ralph, though this rescue seems to be symbolically accomplished for the sole purpose of atoning for the fact that he earlier failed to rescue the Lady. But Ursula travels side by side with him as he returns to root out the would-be conquerors of Upmeads, refusing to stay in safety when he goes to war; and the equality of their partnership continues to be implied to the end of the book. She is also repeatedly mistaken for the Lady, which confirms that she is the inheritrix of the Lady’s powers – of active desire as well as of foresight.

The conclusion one reaches, after reading The Well at the World’s End, is that Morris wants his readers to understand that a society is only ever as civilized as the way it treats its women. The tyrannies Ralph encounters are defined as such by the women who live under them: the captive women in the Burg of the Four Friths, the merchant towns that collude with Ursula’s enslavement, the unhappy Queen of Utterbol and her devious maid Agatha, both of whom have had their personalities deformed by the aggressive patriarchal culture they find themselves in – a point driven home by the fact that both succeed in redeeming themselves when they’re freed from oppression. Women, Morris implies, deserve to share power with men in exactly the way that men deserve to share power with each other. The climactic battle of the book is fought not by a single mighty leader, as so many history books imply, but by an egalitarian army made up of farmers, shepherds and outlaws; Ralph barely lifts a finger in it. He is a catalyst, not an agent; and what he brings about is health, the healthy society that drinks, like Ursula, from the same Well as he does. 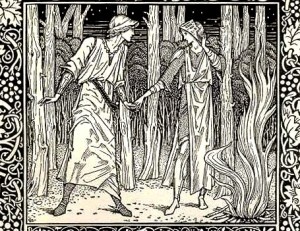 Of course, The Well at the World’s End was a big influence on Tolkien – like a lot of Morris’s work (The House of the Wulfings is often mentioned). Names echo across both books (Gandolf; Silverfax); and it’s structurally very close, with a There-and-Back-Again plot that closes with a Scouring of the Shire. But it’s also radically different from The Lord of the Rings because of the women who drive it, and because of its fascination with ambiguous, redeemable characters; there’s no equivalent here of a one-dimensional orc. And its There-and-Back-Again plot isn’t a return to the status quo, but a radical cleansing, a democratizing of the past as a blueprint for a better future. That’s why Morris had to write fantasy at the end of his life; because no society had ever quite succeeded in doing what he wanted it to do. And it’s interesting to consider whether some aspect of this radically democratizing impulse was retained in Tolkien’s post-Morrisian vision.