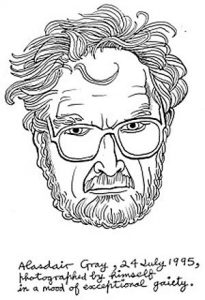 I knew Alasdair Gray. During his lifetime I was always aware that typing those words would one day come to seem momentous, like saying I knew William Blake or Ursula Le Guin. The seed of this momentousness was sown the moment I arrived in Glasgow and read his fantastic novel Lanark as a guide to the city. There could be no better guide, since it covers everything: Glasgow’s architecture and inhabitants, its place in the British Empire and hence the world, its place in the spiritual universe, the quality of its light, the various kinds of illnesses it suffers from (turning into a salamander being the least of them), and the fact that living there made one complicit with the conditions that cause its ills – as well as with the glories and wonders it is full of. Not long after my arrival at the University of Glasgow in 1992 I found myself teaching the novel of his I love most, Poor Things, which is about a woman who may or may not have been cobbled together, Frankenstein style, by an eccentric surgeon. The book made Glasgow into Frankenstein’s creature, and Scotland too, and the British Empire, and the world. Local things became universal in Gray’s writing, more explicitly than in the work of anyone else I can think of except James Joyce, and this made me proud to be a citizen of the city he lived in.

I met him through a mutual friend, the critic and poet Philip Hobsbaum, founder of a series of influential writer’s groups in Belfast, London and Glasgow. Alasdair was a regular visitor to his house in Oban Drive, and on one occasion he bought a drawing made by my daughter, who was in Primary School at the time. He paid her a pound for it, I think, and said it was an investment for the future, since she was bound to become a famous artist, and he could then sell it for a vast profit. In one gesture, the man summed himself up: a lifelong agitator for decent wages for artists and other workers; a visionary who was always looking to the future, not least in the way he pictured Scotland as an independent socialist republic; a warm and gentle human being who respected and spoke to everyone, though he also seemed profoundly shy. I say ‘seemed’ because his shyness didn’t make him shy away from (for example) public speaking at demonstrations or conversations with strangers, at least in my experience. That said, I didn’t speak to him as often or for as long as I would have liked to. I always felt I shouldn’t take up too many minutes of his astonishingly creative time. 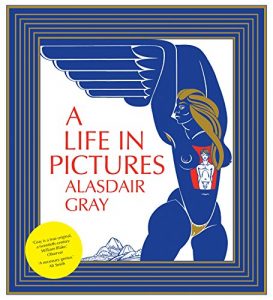 One story I heard from the Hobsbaums, among many others, concerned Alasdair’s creation of one of his finest murals in the front room of Philip’s wife Rosemary, who then lived in West Prince’s Street, a slightly shabby address in Glasgow’s West End. Alasdair had been enjoying himself one evening, to the extent that he cut himself somehow without noticing and left a smear of blood on the living room wall. He liked the shape made by the blood, which resembled the body of a whale, and later came back with his paints and started to sketch out a gigantic mural depicting one of his favourite characters, the reluctant prophet Jonah who was swallowed by one of the great leviathans of the sea. He painted and painted for weeks until the mural was complete. A few years later, Rosemary sold the flat and moved somewhere else, and the new owner wallpapered over the mural. I can’t say I altogether blame them, because it did take up the whole of one wall of the main room in a small apartment, and it was hard to appreciate the picture as a whole because the room was too small to stand back from the painting far enough to see it entire. A few years after that another new owner removed the wallpaper and found the mural underneath, badly damaged by glue. She got in touch with Alasdair to say she’d found it, and Alasdair agreed to come and restore it, entirely free of charge. When the restoration was finished the owner made the painting available to be seen by the public for Doors Open Day, the date in September when the public are invited into private buildings throughout the UK to which they do not normally have access. I saw it then, was blown away by it, and was delighted when it found its way into that beautiful volume Alasdair Gray: A Life in Pictures (I’d give you the page number but the book is in my office at work, inaccessible because of the lockdown). Alasdair fought all his life to achieve fair play for workers, including artists like himself, but his generosity was boundless, and he could spend many hours of his precious time making art for little or nothing, as a gift, a promise, an uninvited prophetic vision.

A few years after meeting him I was lucky enough to work with Alasdair when he came to work at the University of Glasgow as Professor of Creative Writing. Actually the Professorship was another Frankenstein’s creature, having been cobbled together from three entities: the novelist James Kelman, the poet Tom Leonard, and Gray. They had grand designs, which the university was not in the end able to fulfil. One of them was to buy the former church on University Avenue which is now the Charles Wilson Lecture Theatre, and turn the building into a state-of-the-art centre for creative writing, equipped with the latest IT technology, film studios, performing spaces, etc. etc., and attended by around 20 hand-picked students every year, the best and brightest of applicants to the MLitt programme, as it was then. I don’t think the vision was altogether serious, in that nobody thought it could really happen, but it was an authentic representation of the place the arts should occupy in a healthy society from the Professors’ point of view. The most memorable moment of the Professors’ brief tenure as a trio, from my own point of view, was an Away Day in a certain Scottish rural village, organised by the then Head of English Literature, Susan Castillo, to make plans for the future of creative writing at Glasgow. It was attended by my friends Willy Maley and Adam Piette as well as Susan, and the three professors stayed with us in the big hotel that dominates the village. At one point during the proceedings we found ourselves in the village pub. The conversation carried on far into the night in front of the fire, with round after round arriving at the table and the visions of possible futures getting more elaborate and ambitious with every passing hour. I think the doors were locked at one point, but I can’t be sure. We reeled back to the hotel by starlight, and when I woke up in the morning the whole thing seemed to have been a dream; but it was one of those dreams you had in Alasdair’s company – and in Jim’s and Tom’s too – which contained the seeds of political action driven by the engine of the imagination. In Alasdair’s company you too had visions, and carried them home with you to nourish after your time with him was over.

I also remember Jim, Tom and Alasdair reading to students during an occupation. If you approached them to support you in what they considered an important cause they were always available, always committed, always able to find a way to use their art on your behalf. 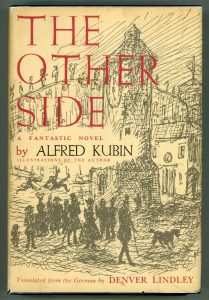 On two occasions I myself approached Alasdair to ask his opinion of other writer-artists whose work I liked, and thought he might like too. The first was Alfred Kubin, the Austrian printmaker, illustrator and novelist, whose book The Other Side I’ve loved since being introduced to it by one of my university tutors, Christopher Butler. Alasdair took it away, read it carefully, and wrote me a note about it in his unique and beautiful handwriting. He didn’t like the novel, which seemed to him to be about a man who created a perfect replica of a town in the Austro-Hungarian empire for no better reason than a kind of misplaced nostalgia; the illustrations, too, he considered blurrily impressionistic, without style or focus. These are my words, not his; I still have the note, but that too is locked away in my office; when I can get back in there I’ll type it out in full below [no I won’t; I’ll make another blog post about it!]. The point is that he didn’t think much of art that didn’t engage with politics. An artist should be committed, the three professors told us often, and by that they meant as much committed to social transformation as to their art. Alasdair’s understanding of commitment was pretty broad, I think, but didn’t embrace the construction of what amounted to an imaginary theme-park for the perpetuation of inequalities.

The second time I approached him for comment on a writer-artist was when I went to look for him at the Òran Mór – the former church, now entertainment venue, where for many years he could be found working on his biggest and most ambitious mural – to ask if he would provide me with a quotation for the cover of my edition of the Collected Poems of Mervyn Peake. I found him at the bar, asked him my question, and watched him consider it carefully for several minutes. Eventually he gave his answer. No, he said, he couldn’t possibly provide an encomium for a writer-artist who did not dedicate his work to a worthwhile cause. And having issued this declaration of his own integrity – perhaps with slight reluctance – he suddenly burst into verse. He was quoting verbatim, from memory, a poem from Peake’s first novel, Titus Groan. I think this was the stanza, with its chorus:

In dark alcoves I have lingered
Conscious of dead dynasties.
I have lingered in blue cellars
And in hollow trunks of trees.
Many a traveller by moonlight
Passing by a winding stair
Or a cold and crumbling archway
Has been shocked to find me there.

I have longed for thee, my Only,
Hark! The footsteps of the Groan!
Lingering is so very lonely
When one lingers all alone.

Gray, it seemed, loved Mervyn Peake – or at least liked his work enough to memorize a poem from it (Edwin Morgan liked it too). I was enchanted, both by the refusal and by the revelation, and have never forgotten the experience of listening to Alasdair’s voice rising over the hubbub of conversation at the bar as he intoned the words he considered too frivolous to be written about, but by no means too frivolous to be internalised, to be made part of himself. From such contradictions geniuses are made.

Those are my words about Alasdair Gray, written on the inaugural Gray Day, when his friends and fans gather together to remember a remarkable creator – or maker, the word he would rather use. My memories may be faulty, but they’re mine, for what they’re worth, and you’re welcome to them. 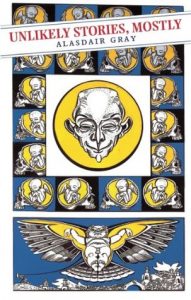