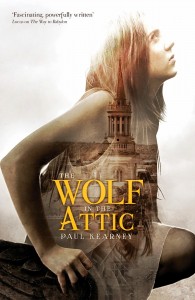 Paul Kearney’s new novel draws together a number of familiar threads in contemporary fantasy, but makes something new and beguiling out of them. The plucky heroine, Anna Francis – who turns twelve towards the end of the book and roams wild across the Oxford landscape – recalls Philip Pullman’s Lyra; except that she’s a Greek exile, with recurring memories of the Graeco-Turkish War of 1919-22 which engulfed her home city in flames, killing her mother and brother and sending her into exile with her troubled father in a chilly northern country. She’s not at home in Oxford as Pullman’s Lyra was, and is subjected to racist abuse by the hostile locals; the fact that she is home schooled also deprives her of Lyra’s motley network of friends. J R R Tolkien and C S Lewis – as Ronald and Jack – provide her with a welcome substitute for the company of her peers, but they compete for her attention with issues of politics, economics, gender, class and race that they largely ignored in their fantasies. Ancient conflicts emerge from the shadows in the course of the book, and Anna gets caught up in them much as Will Stanton does in Susan Cooper’s The Dark is Rising; but they too seem to share in the complexity of British culture between the wars, making the clear moral division between Light and Dark impossible to maintain. Wytham Wood – the place that once inspired William Horwood to write epic stories about itinerant moles – here gets transformed into an outpost of Robert Holdstock’s Mythago Wood, full of shadowy monsters and half-forgotten perils. One gets the impression that Kearney has hugely enjoyed running themes and people from the books he loves up against the radical changes in social and political consciousness that have taken place since they were written. 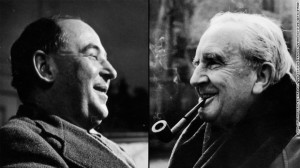 It’s as much fun, then, spotting the ways this novel disrupts those older fantasies as picking out references to familiar elements in them. Kearney traces – and partly reinvents – the roots of Tolkien’s fascination with hobbits, Ents and skin-changers (such as Beorn in The Hobbit), as well as Lewis’s interest in portals between worlds, Greek myth of the kind he elaborated in Till We Have Faces, and the problems and possibilities of the Christian religion. Christianity finds itself in dialogue with older religions – much as it was in Tolkien’s beloved Beowulf – and there is a magnificently convincing representation of the old Archfiend, Satan himself, as a Holdstockian mythago, as much at home in the world of the pagan blacksmith Weyland as in the cosmic wanderings of the first two books of Paradise Lost. Herne the Hunter, who featured so memorably in The Dark is Rising, gets caught up here with Gowther Mossock of The Weirdstone of Brisingamen and an archangel from either the Bible or Pullman’s His Dark Materials in a struggle for souls with this quasi-biblical damned spirit. What’s impressive about Kearney’s achievement is his success in combining so many disparate elements into a seamless new whole, the disparate threads that have gone into its composition barely noticeable until you’ve finished reading. For fantasy lovers this book combines the pleasures of the boardgame or the quiz with those of the thriller, the predictable with the surprising, and ends by leaving you with the hope that it’s just the start of something larger. 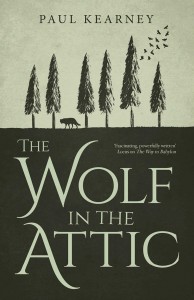 A neat example of Kearney’s method is his references to knives, which run through the text like a crimson thread from first to last, changing allegiance and signification with each appearance. Anna encounters one first on the rough common grasslands of Port Meadow, where travellers fight to a bloody denouement and suck her into a world where casual death by violence is as commonplace as it was rare in the imagined worlds of Oxford’s two most celebrated fantasists. Approaching the scene of the fight Anna wishes she had brought her knife – ‘a little Watts penknife Pa used to keep for scraping out his pipe’ – but it’s as much because this represents her only protector – her father – as for any practical use it might have had (‘I don’t think it’s big enough to cut a Turk’s throat,’ she tells herself, associating all dangers at this point with the people who destroyed her family). Already she’s conscious that knives may have two different functions – symbolic and practical – and that weapons in themselves are ineffectual if not suited to the task in hand (a ‘stupid little knife would be nothing’ to the swords and spears of the Homeric heroes, she tells herself later). But the knife that does the killing in Port Meadow demonstrates something else about weapons like these: that they can be double-edged, turning against their owners with fatal consequences. And not long afterwards her own knife gets used in transgressive acts: first to cut an opening to a part of the house her father doesn’t know about (‘Not a weapon, but a tool,’ she tells herself as she traces the edges of a hidden door that leads to the attic); and later still to perpetrate a second murder, then to expose it. This second death-by-stabbing teaches her that trusted friends can be double-edged too, turning against their companions with the kind of racially-motivated, casual cruelty that would come to characterize the new decade of the 1930s. The same little penknife reveals to Anna the kind of man her father was – a double-edged figure, very different from the melancholy Greek hero she idealized in her childhood (though this is something his occasional violence had already taught her). And at the end of the novel Anna uses it herself in an act of violence, a near mirror image of the one she witnessed on Port Meadow. All these developments confirm the impossibility of passing absolute judgement on any given action: the drawing of a knife, the drawing of blood, a bloody war between families or nations. And the centrality of the knife to Kearney’s narrative forges further links with folklore and fantasy: the second volume of His Dark Materials, for instance (The Subtle Knife), or the iron-shaping powers of Weyland the Smith, whose entry into ancient Britain announced the arrival of powerful strangers wielding weapons no weapon of bronze could hope to compete with. That’s a lot of symbolic weight to be packed into a single recurring image, and Kearney carries off the trick with real aplomb.

The aspect of the narrative that most clearly marks out its difference from the works of Lewis and Tolkien is its concern with the body. Kearney pays attention to many aspects of the body those men could never have brought themselves to mention: the need to relieve oneself at awkward moments, the effect of period pains on one’s efforts to effect a cross-country getaway, the impossibility of resisting the urge to blush, the problem of getting clean in a waterless wood, the necessity of cutting long hair when it gets too filthy to be washed or combed. Bodily changes are his subject; but where Lewis’s shape-shifters are invariably morally shifty – think of the werewolf in Prince Caspian – Kearney’s are neutral, tied in like the menstrual cycle to the changes of the moon, and so symptomatic of the role played by transitions in human experience. Lewis’s children in the Narnian chronicles ‘grew out’ of fantasy, learning to replace those allegorical representations of religious concepts with direct encounters with the concepts themselves. Kearney’s Anna finds instead that her fantastic encounters are directly tied in with the process of her own maturation. It’s her growth to adulthood that makes her useful to the ambiguous beings who inhabit the Oxfordshire woodlands. Constancy, in Kearney’s novel, is the property of dolls, not people, and Anna carries a reminder of this about with her throughout the book in the form of her own doll Pie: Pie is short for Penelope, the wife who stayed constant to Odysseus through all the years of his wanderings. Constancy is also the property of the dead, and Pie was given to Anna by her older brother, who died fighting the Turks. The centrality of change to the text is an implied critique of the ages-long constancy of Tolkien’s Elves and Ents, of Lewis’s Aslan. Even the most ancient communities in Kearney’s book are subject to change, dwindling in strength and potency as they drift though time – and each change of body the shapeshifters among them undergo robs them of vitality, changing their human bodies more swiftly than the ordinary ageing process. Changelessness as applied to mortals is a myth, and not a particularly helpful one in an age of such radical change as the twentieth century.

At the same time, the book shares with Lewis, Tolkien and other British-based fantasists a deep delight in the English countryside – a delight which is most fully felt by his Greek protagonist (and Lewis, who felt it too, reminds Anna that he is an Ulsterman, and so understands her sense of exile). Kearney’s depiction of snow recalls Lewis’s account of it in The Lion, the Witch and the Wardrobe. His evocation of the Berkshire downs rivals Garner’s of Alderley Edge for the pleasure it takes in rendering the familiar contours of the land mysterious. His Wytham Wood echoes the Wild Wood of The Wind in the Willows, another British fantasy he references, this time through Anna’s passion for the books of Graham and Nesbit. Like Tolkien’s, his characters lament the rapidity of the changes that are stripping such woods from the landscapes of Britain, Europe, the world. There will come a time, one of them predicts, when all will be gone. Then books like these will be the imaginative scars that mark the places where the woods once grew – like the scars that her adventures leave on Anna’s body, or the scars left by her lost loved ones on her mind. Anna will become one of the Cassandras of our generation, her fears for the future of her beloved hills and valleys only believed when they have been fulfilled. But her courage, her heroic resistance to having her changes dictated and used by others, also suggests that the erasure of the beautiful places can be withstood. That’s a fantasy worth cultivating.