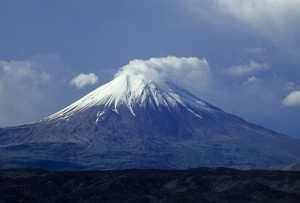 The High Priest of the Sun stood on a little hill and lifted high his palsied gloves before the multitude. He was older than the hill he stood on, and somewhere in the course of his many reincarnations had lost the use of his eyes, his ears, his taste-buds and his sphincter muscles. On his head he wore a massive jewel-encrusted crown of seven layers: gold, silver, bronze, tin, wood, glass, and salt. The topmost layer had rather changed its shape in a recent downpour. His robes were made of seven-ply cloth of gold, which rendered them hot and stiff. There was a small bench attached inside so that when he got tired during a ceremony – which he often did – he could seat himself comfortably and still give the appearance of standing upright, supported by the rigid folds of his inner garment. His face was a mass of wrinkles, the sightless eyes deeply recessed in his delicate skull.

When the High Priest got agitated his jawbone sometimes detached itself due to weaknesses in the condylar process and the masseter. So a skilled ventriloquist was standing by, ready to take over his speech in the event of an awkward silence. There was ample room for the ventriloquist in the hollows of the old man’s cloak, which was half a mile long with a pearl to every inch.

The High Priest of the Sun raised high his palsied gloves before the multitude, dropped his jaw so that saliva dribbled down his chin, and nudged the ventriloquist with his foot, warning him to pay close attention.

‘Brethren!’ he cried, in stern and ringing tones. ‘Or children, or sinners, or Chosen Ones – depending on your preference. We are gathered together in this place, as well you know, from every corner of this vast terrestrial orb, or plain, or shell, for an experiment. An experiment on a scale never attempted since the creation – or big bang, or birthing of the world, or hatching of the cosmic egg, whichever takes your fancy. We are all here, emissaries from every known religion, devotees of every known cult, firm in faith and ambitious in design, glorying in the honour of our temples, churches, or sacred geographical features, and inspired by the sight of this, the grandest mountain in this or any other dimension…’

At this point there was a resounding crack, and the High Priest’s chin flapped uselessly on his scrawny neck. Inside the folds of his cloak the ventriloquist gave a start and ruffled hastily through his manuscript.

‘…in …in …in order to participate in a test unprecedented in human history.’

As he spoke, officers picked for the clarity of their voices roared the speech to one another, relaying it to the ears of the millions who had gathered in the shadow of Mount Shi in obedience to the summons of the High Priest of the Sun. One officer shouted to the next what the High Priest was saying, the next bawled the same words to his nearest neighbour, and so on, so that gradually more and more of the priests, shamans, god-kings, acolytes and faithful believers found themselves nodding in agreement, and a ripple of movement, a faint swell of sound ran over the surface of the crowd like a cat’s paw of wind over the surface of a quiet ocean.

‘We are here, worthy brethren, to move Mount Shi.’

A murmur rose from the first to hear this. Then gradually, as the sentence was relayed about the throng, the murmur grew to a rumble, and the rumble to a steady throb that vibrated in the soles of the High Priest’s cork-heeled shoes. The crowd’s anticipation was palpable; and the farthest section of that unprecedented congregation was only beginning to voice it a quarter of an hour after the nearest had fallen silent.

The priest, his gloves still quivering in the air, gave his head a shake to try and relocate his jaw. He must keep his arms extended skywards, for if once he lowered them he would lose the right to continue speaking. But he had remembered something he had omitted from the ventriloquist’s notes. Something important. Something on which their very lives might depend… He shook his head, and nodded it, and wagged it wildly round and round. Drool from his gaping mouth splashed the ventriloquist in his hiding place, but that highly-trained professional had been instructed to ignore the physical symptoms of his master’s decrepitude. Safe in his nest, he rustled his papers importantly and carried on, uplifted with the excitement of addressing so large a multitude.

‘Brethren!’ he cried. ‘Brethren! Our researches indicate that you have all included in the tenets of your religions – enshrined as a saying or a song, a hieroglyph, a rune, or a meaningful gesture – the unshakeable conviction that Faith Moves Mountains. Today we shall test that conviction. Today we shall discover the true religion, the One True God!’

Another half-hour murmur thundered about the plain beneath the snow-capped mass of Mount Shi. Behind the mountain, dawn was crouching ready to brindle the horizon. The clouds flocked by in small pink herds, unconscious of the imminent approach of morning. A few of the faithful chosen souls had fallen asleep where they stood or knelt or lay, patiently waiting for their own particular officer-interpreter to relay the High Priest’s latest words.

‘The experiment will be conducted as follows. Each of you will stand or kneel or lie facing the mountain; and each shall call out, in a stern and ringing voice, the following command (or some suitable modification that conforms to your own theological perspective): IN THE NAME OF GOD, BE THOU REMOVED AND BE THOU CAST INTO THE SEA. If you turn your heads you will see the Ocean of Pish directly behind your backs.’

This news was greeted with a rustle as of wind-tossed leaves in a mighty forest, as every individual turned to get a look at the distant waters glittering between the dark silhouettes of the western hills. Then all eyes turned again to the tiny figure of the Priest, perched on his hummock at the mountain’s feet. The sun was beginning to stretch and yawn behind Mount Shi, scattering rays of light from its tousled mane.

‘As the organizer of this experiment,’ cried the ventriloquist, his voice breaking a little with emotion, ‘I claim the privilege of initiating this holy procedure.’

Together, High Priest and Ventriloquist revolved until they were facing eastwards. Trembling now with faith as well as palsy – trying to dismiss from his mind the nagging anxiety that refused to let him be – the High Priest lifted his sightless eyes to the sheer West Face of the holy peak. He stood up straight in his cork-heeled shoes, raised his arms a little higher and cleared his throat. Then the ventriloquist stepped forth out of the shadow of his cloak, and cried aloud in the sternest and most ringing tones he could muster:

‘Three pounds of tomatoes! A carrot! Take two large onions, chop them to bits, and fry until transparent!’

The officers began to repeat the words, then clamped their lips suddenly shut and looked round in amazement at the High Priest of the Sun. The ventriloquist went bright red, muttered, ‘I beg your pardon… I must have got my notes muddled up…’ and vanished into the protection of the cloak. The High Priest nodded his head and let his arms drop to his sides. His eyes popped out of their sockets, his tongue unfurled itself from between his mottled gums, and slowly, very slowly he subsided into the recesses of his gown. His sphincter muscles gave a final, brief convulsion. His heart ceased to beat, warmth died away in his brain, and his soul departed thankfully, already looking forward to its next incarnation. It thought it would try something more modest this time: a newt, perhaps, or some sort of crawling insect. A creature without voice or ambitions, and highly unlikely to live to a ripe old age.

Meanwhile the ventriloquist, eager to distract attention from his master’s collapse and his own unfortunate part in it, squeaked ‘Your turn now!’ and dived to the ground with his hands over his ears.

There was a long, long pause as the officers explained the situation to the multitude. With uncharacteristic patience, the first to hear the ventriloquist’s invitation waited in utter silence as the word spread abroad. Heads bowed in thought, hands clasped on their stomachs, they concentrated on summoning every ounce of their spiritual energy for the momentous challenge to come. Then, as the last officer barked the three-word phrase to the most distant members of that innumerable assembly, every priest, shaman, god-king, acolyte and faithful believer on the plain before Mount Shi raised his or her head with the fire of fanaticism flashing in his or her eyes. Every religious leader on the earth’s surface adjusted his or her stance minutely, planting his or her feet firmly in the churned-up sand, straightening his or her spine and rising to his or her full height. A million gazes fixed themselves on the snow-covered peak of the mountain. A million throats gave a nervous cough, and a few rocks were dislodged by the sound from the serrated ridge above the High Priest’s promontory. A million voices trumpeted, in a thousand different languages, in the sternest and most ringing tones they could manage, some variation on the command with which they were all so familiar:

‘IN THE NAME OF GOD, BE THOU REMOVED AND BE THOU CAST INTO THE SEA!’

It was at this moment that the ventriloquist belatedly realized what the High Priest had been trying to say. ‘One at a time! One at a time!’ he squealed with all his might. Nobody heard him.

With a thunderous groan the mountain gave a heave and cracks ran across its many faces. It rumbled like a very large man with toothache; roared like a beast in intolerable pain; and finally howled in a terrifying all-consuming shriek. Boulders tore themselves loose from their age-old moorings in its flesh, then bounded down as if exulting in their brief mobility and drove furrows through the screaming crowd. A huge crack opened in the earth at the mountain’s feet, and the little hill on which the High Priest’s lifeless form still stood – still attended by the ventriloquist, whose hands were still clamped firmly over his ears – subsided into the depths. More cracks ran across the plain, opening rifts between segments of the crowd into which screaming knots of faithful believers tumbled, clinging to one another as passionately as they had ever clung to their convictions. Pits opened here or there like wounds and the earth’s fiery blood squirted out of them, drenching god-kings and acolytes without discrimination. Dust rose in a choking cloud that clogged the lungs and filled the mouth. Interpreter-officers ran about madly, their mouths wide open as if still discharging their offices, relaying fear from ear to ear till they plunged into an abyss or were crushed beneath a falling lump of granite. Priests, shamans, monks, nuns, prophets, faithful believers, and believers who had been seized with sudden doubt – all found themselves unceremoniously stripped of life and tumbled into a chaotic common burial ground. And Mount Shi began to slide. It slid across the plain, between the western hills and into the seething Ocean of Pish, where it vanished from mortal sight and mind, never to be seen again in this or any other dimension.

As the mountain sank beneath the waves a cloud of steam obscured the sky from horizon to horizon. But before this happened, in the lull before the final storm, the sun appeared in the space where the mountain had been standing.

Dawn came, and the birds in the nearby forest began to sing.