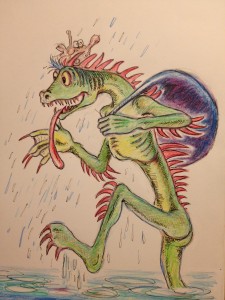 The inclement weather continues, despite the departure several weeks ago of the angry rain goddess unearthed in the course of our building works here in Glasgow. The unusual quantities of water in our streets have had some unexpected consequences, and we have asked a visiting professor from Thok, Professor Gumbrimipil, to advise people in the area of the appropriate precautions to take against them.

My thanks to the worthy professors, magisters and dominis of the University of Glasgow for permitting me to alert their colleagues, students and support staff to the deadly situation that has developed in the city streets over the last two months. In the Northern Territories of Australia, where I have spent some time on field trips and long vacations, a similar phenomenon has been reported with regard to salt water crocodiles. After heavy rain, deep ponds called billabongs form in places previously dry, and of course these newly-formed water holes are at first quite empty of wildlife with the exception of birds and the occasional drowned and rotting cane toad. If the rain should continue, however, larger animals will take advantage of the formation of new watercourses – rivers, burns and substantial streams – to travel into new territories. Under these circumstances casual human swimmers must take extra care: tempted by the heat into stripping off their clothes and leaping, Agutter-like, into the deep black waters of a previously uninhabited billabong, they may find their legs nipped off by a bull crocodile, or their head unceremoniously removed by a ravenous bunyip. Ascertaining the safety of deep black billabongs is of course difficult; the best method, my friends inform me, is to send your dog or your elderly relatives for a swim before you.

Much the same thing has been reported in recent weeks by observers of the usually clandestine supernatural community of the City of Glasgow. Families of water-sprites with needle-sharp teeth have been spotted undulating along the flooded sidestreets near George Square, their belongings wrapped in bundles made of black plastic refuse sacks, their foodstuff balanced on their slimy heads. Kelpies have been seen not only in their usual place, the River Kelvin, but in the Stewart Memorial Fountain, the boat pond in Queen’s Park, the artificial waterfall at Rouken Glen and the terracotta water feature outside the People’s Palace in Glasgow Green. Even some of the larger puddles in the Dumbarton Road have been seen to host small, brightly-coloured kelpies (a kelpie loses its distinctive rainbow colouring as it gets older). I do not need to tell you how dangerous this is for passing schoolchildren, who may be tempted to jump on a kelpie’s back in the mistaken belief that it is a timeworn fairground ride purloined by some prankster from the Scottish Exhibition Centre and dumped there for entertainment purposes. No Scot will be ignorant of the consequences of such rashness: a kelpie can drown a mortal in less than half an inch of liquid.

What to do under these circumstances? What to do to protect the young and vulnerable? A black umbrella is of course a useful ward against the shyer elementals – not so much because of the sharpness of its iron ferrule as because of its appearance, reminiscent as it is of the batty wings of the greater spotted bogle, the natural enemy of water sprites and kelpies in their highland habitat. But a fully-grown kelpie will not fear a black umbrella, and sterner measures will be needed. A camera flash can be used to blind them, or a LED torch if it is sufficiently powerful – but these are only temporary deterrents, and a mature kelpie will quickly recall that it possesses several sets of protective lids to combat bright lights of every intensity. Stamping and making loud noises is recommended by some experts, but I would not care to try this: noise can infuriate a water sprite in transit, and their teeth are needle sharp, as I think I’ve mentioned. Making faces (‘gurning’) is less than useless, notwithstanding the many erudite articles on this subject penned by my colleague Professor Bulbul.

No, the one sure defence against the water elementals is – to foul their water. This is easier said than done under the current meteorological conditions, when a constant supply of fresh clean water is pouring out of the clouds throughout the day. Even under ordinary circumstances the waterways around Glasgow are much cleaner than they were on my last visit in the early 1980s, when you could still see sizeable clumps of yellowish foam riding down the Kelvin and no fish had been spotted in the city salmon runs for generations. Fortunately, however, what we think of as contamination and what the common kelpie regards as a pollutant are two quite different things. The kelpie is fastidious when it comes to drink. Even the slightest tint of alcohol in its environs will send it scurrying for the nearest river bank, shaking the tendrils round its horsey nose in profound distress. Drink, ladies and gentlemen; drink is our bane and our redemption. Spirituous liquors in particular – anything above, say, 40% abv – are anathema to a water elemental. The addition of merely a few drops of the cheapest whisky to a medium-sized watercourse will have an astonishing effect on all varieties of undine, turning water sprites a deep purple with shock, curling the kelpies’ nose-tendrils into corkscrews and triggering harmless but debilitating seizures in any stray selkies or merpeople who happen to be in the vicinity. Drink must clean up Glasgow’s waterlogged streets in the twenty-first century, just as drink has so often been responsible for sullying that city’s streets – and indeed its global reputation – in times gone by. There could be no simpler solution to the current crisis – if only the Glaswegians were willing to accept its efficacy.

I discovered the undinacidal properties of alcohol quite by accident in 1983 and have been publishing papers on the subject ever since, as any respectable life scientist will tell you. But if that life scientist is an honest one, she will also tell you how my discoveries have been received by my fellow scientists. They were derided, ladies and gentlemen – laughed to scorn as humbug, a schoolgirl hoax, a blatant and irresponsible falsification of the available data. The most vehement deniers of my results have been, I am sorry to say, certain Scottish academics – citizens of the very nation that has most to gain from implementing my solution (if I may indulge in a small but apposite jeu-de-mots) to the current crisis, because of the extraordinarily high density of water elementals to be found there. The headlines in Scottish newspapers that greeted my first publication were sometimes insulting: ‘SPIRITS FOR SPIRITS, SAYS WHISKY-SOAKED SCIENTIST’ was the least of them; ‘BIOLOGIST SEEKS TO DESTROY THE SCOTTISH WHISKY INDUSTRY’, ‘IT’S THE ALCOHOL, STUPID’, ‘A BITTER GUMBRIMIPIL TO SWALLOW’ were other examples. The hostility of Scotland to my work has continued unabated to this day. To my shame I have sometimes wondered whether an excessive attachment to their national beverage might lie behind this irrational behaviour. Could it be that Scots are so addicted to their local aqua vitae that they will stop at nothing to suppress any intimation that it might be used for something more noble than its usual purpose: that is, to be poured in liberal doses down a person’s neck?

For this reason, I seized with eagerness on the invitation from the good directors of the Glasgow Fantasy Hub to compose this article. I felt that it represented my last, best hope of drawing the attention of at least some members of Glasgow’s academic community to the state of their waterways, and to the simple method I have identified of restoring them to a safe condition. Let this be a rallying cry to the staff and students of the university. Go forth in your tens and twenties, ladies and gentlemen of legal age, and purchase whisky – the better the whisky, I have found, the more devastating its effects on any aqueous supernatural body. Unscrew the top of the bottle, turn it upside down, and pour the contents without hesitation or regret into the nearest drain. Your children and grandchildren will thank you for it. Future generations will praise your sacrifice. Even your own livers will show their gratitude in a modest but noticeable way. I urge you to do this for your own sakes and for those of the vulnerable members of your community. And if you do not – well, don’t blame me for the consequences, that’s all I ask. Should you choose to go on drinking whisky rather than spraying it from hosepipes, watering cans and decanters into your local ponds and reservoirs – I won’t be held responsible. I have done what I can. Your destiny remains in your hands, and in the contents of the old oak barrels (formerly used for sherry or bourbon) stored in such astonishing quantities in your warehouses.

Slàinte mhath, as the water-sprites whisper to one another before sinking their needle-sharp teeth into the leg of an unwary traveller. Good health to Scotland, from its sincere well-wisher