[This is a poem I wrote for some Dutch friends, former neighbours in Glasgow who now live in Rhode Island. Our two families always celebrated the Dutch festival of Saint Nicholas together, and we still send each other poems every year. Saint Nicholas came from Turkey, though for some reason he always sails to the Netherlands via Spain. His day is 5 December, but his journey from Spain takes a week and you can follow its progress on Dutch TV.] 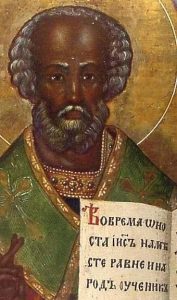 Saint Nicholas has far to go
Across the waves from Spain.
His little boat is powered by snow
And wind, and spray, and rain.

His little helpers, so they say,
Are blue, and green, and pink;
Saint Nicholas’s hair is grey;
His face is black as ink.

Saint Nicholas was once a girl,
But now his form is male.
He watched his silver beard unfurl
As slowly as a snail.

For centuries he watched it grow
And watered it with tears,
While sun, and rain, and wind, and snow
Marked out the passing years.

And now it flies behind him as
He skims across the waves
With piles of presents in his arms
For refugees and slaves.

And when he sees your waiting shoes
He’ll fill them full of dreams,
Where every shoe’s a bark canoe
And every street’s a stream.

And every stream runs dimpling down
Through hills, and heaths, and trees,
To join the green, red, yellow, brown,
Kaleidoscopic seas;

There where the boats dash to and fro
With Nicholas and his friends:
Whales from the lands of ice and snow,
Birds from the ocean’s ends;

And as the waters rise and rise
And as the skies grow dark,
Studded with little blinking eyes,
The boats will form an ark.

The ark will forge through froth and foam,
The birds and whales will hum,
And nudge the vessel gently home
In some strange time to come.

And where it lands its wooden sides
Will root themselves and grow,
And strange new creatures leap or glide
Into the evening glow.

And as they peer about in fear
Dreading another storm,
Saint Nicholas will reappear
In some bizarre new form.

He’ll try to make them understand
They’ve nothing left to lose;
And then he’ll sink down in the sand
And give them back their shoes.

And some of them will put them on
As hats, or masks, or shells,
While others jump aboard and sail
Them off like caravels.

And others still will walk away
With shoes on both their feet,
And build a little town of clay
With trees on every street.

And every house will be an inn
For folk from overseas,
With food and drink and clothes within
For slaves and refugees.

And every night they’ll lay their shoes
Outside the door with care,
So folk with nothing left to lose
Will know they’re welcome there.

And every morning they’ll look out
Through panes of coloured glass
And hum this little song about
The new Saint Nicholas.