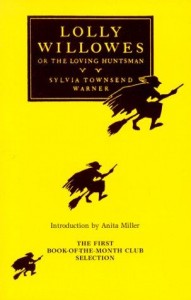 Sylvia Townsend Warner’s Lolly Willowes (1926) is one of a trio of fantasy masterpieces written by British women in the 1920s (Hope Mirrlees’s Lud-in-the-Mist, Virginia Woolf’s Orlando and this), in the run up to the universal franchise of 1928.

This is by far the least known of the three, but it shares the strangeness of the other two. In some ways, in fact, it’s the strangest of all, because of the way its strangeness creeps up on you. If you’re told it’s about a woman who becomes a witch, you may get the wrong impression: you may assume that it’s about exuberant rebellion, wild midnight dances, the exultation of passionate sexuality and occult powers, but it’s not like that at all. At the beginning Laura Willowes (the name Lolly is thrust on her as a badge of her spinsterhood, a suitable sobriquet for an ageing maiden aunt) assumes she’s part of an unchanging story, the comfortable quasi-aristocratic life in a large house at the turn of the twentieth century – a house to which she literally holds the keys. But the narrative changes: her father dies, a move takes place, she finds herself no longer the protagonist of her own quiet drama but a patronized nanny-figure, lady companion and family servant in her brother’s Bloomsbury household, inhabiting a world of urban polite society she despises, and cut off from the seasonal ebb and flow that delightfully shaped her early years. Her sudden decision to move to the countryside in her late forties – and the way her forties creep up on her in this book is brilliantly observed, as startling as the arrival of The Victorian Age in Woolf’s Orlando – is prompted less by rebellious feelings than by a not wholly understood urge for something very specific, a place, a name (the village she moves to is called Great Mop, itself illogical since there is no Little Mop that anyone’s heard of). And this urge, which doesn’t conform to any of the conventional narratives by which women of her time are expected to explain their motives, becomes the theme of the rest of the book.

Laura doesn’t make ‘friends’ in Great Mop, though she is charmed by the inhabitants. She doesn’t find it beautiful – some of the parts she spends most time in are decidedly ugly. She doesn’t fall in love – the one man she likes there is instantly forgotten as soon as she’s out of his company, and she finds his hens more interesting than he is, since carrying them makes her feel like that magical figure, the ‘henwife’, in old tales. Even when she makes the discovery that most of the inhabitants take part in a nightly Witch’s Sabbath, and is invited to take part, she fails to find that social event any more amusing than her brother’s Bloomsbury parties (though she’s temporarily attracted to some of the participants, which didn’t happen in London). Her powers as a witch don’t work conventionally – and it’s not a witch’s powers that interest her in any case, so much as the witch’s capacity to ignore or forget what others think of her. Finally, when she meets the Devil, patron of witches, her response to him is deeply ambiguous. After all, he’s a powerful male, and powerful men have been a nuisance to her – though she was clearly strongly attached to her powerful father. We’re left at the end of the book not entirely sure what to think of her situation. It’s precarious. She’s liberated in one sense, yet still bound to a male potentate; freed from limiting narratives apart from the most terrifyingly limiting narrative of all, that of the Devil’s right to take eventual possession of her immortal soul. She comforts herself with the thought that neither she nor the Devil have any idea what happens after death (how can he know, since he’s immortal?). But the sense of precariousness remains after you’ve read the final sentence.

One of the things I found fascinating about this book was Townsend Warner’s choice of the Devil as the presiding genius of Lolly Willowes’s ambiguous liberation. It would have been easy to choose Pan instead, and it’s clear that the Devil in this book is very Pan-like. On both occasions when she meets him he adopts the appearance of a rustic man, especially at home in the woods (and for him woods are everywhere: ‘Once a wood, always a wood’, he insists at one point, which explains for Laura the strange feelings she has sometimes got from certain places in the city). Pan was everywhere in fiction between about 1895 and the 1920s: sometimes terrifying (Machen’s The Great God Pan (1890-4)), sometimes unsettling (Forster’s ‘The Story of a Panic’ (1904), Stephens’s The Crock of Gold (1912), Dunsany’s The Blessing of Pan (1928)), sometimes comforting and cuddly (Graham’s The Wind in the Willows (1908)); and he could be used to refer to what was otherwise inexpressible (Forster’s story was about the awakening of homosexual desire, while Stephens’s Pan helps a young woman to free herself from the Irish church’s contempt for the desiring body). But Pan belongs to a dead religion, and from this point of view was a safe figure, safely fantastic, safely impossible, and with an impeccably classical pedigree to justify his inclusion in a respectable middle- or upper-class narrative.

The Devil, on the other hand, is part of a narrative that still had a fierce hold on early twentieth-century British society. He is democratic, in that people of any background may be afraid of him. And he is scary even to non-believers, since the practitioners of Devil-worship have had a universally bad press. Laura’s decision (or is it even a decision? It seems to be thrust on her without her volition) to commit herself to him is therefore disturbing because we genuinely don’t know, as readers, what to make of it. Has she been trapped into making a terrible mistake? Will she free herself from her contract, and if she doesn’t, will she suffer the consequences? Townsend Warner clearly wanted these questions to live on in the reader’s mind after the book has ended, perhaps precisely because the question of women’s freedom and equality with men had not yet found an answer, and wouldn’t find it in 1928, despite the official declaration that they were free at last to participate in the democratic process. The Devil is in the details of such declarations, she might have said (whose definition of democracy were women being invited to collude with?). And it’s in the beautifully observed details of the book, especially of Laura’s always unconventional reactions to the things, events, and people she encounters, that its brilliance lies. 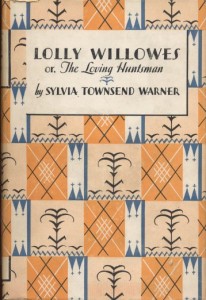