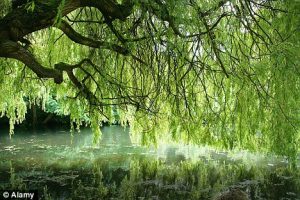 One day she came in to find him sitting at the computer, his face streaming with tears. ‘What on earth’s the matter?’ she asked, thinking he had got an e-mail to say that another of his friends was dead. ‘I’ve found the website for my memories,’ he said.

She looked, and saw sunlight spilling from the monitor, lighting up the tracks of his tears on his poorly-shaven cheeks. As her eyes adjusted to the screen’s brightness she glimpsed willows by a river, sunlight glinting on water, tiny insects dancing in the sunbeams, while peals of birdsong and distant bells poured out of the speakers. Everything was as clear and precise as a sudden recollection that catches you unawares when you’re busy with something else. Tears gathered in her eyes too; that kind of precision is reserved for memories of childhood and youth, and is in itself a trigger for nostalgia regardless of the thing remembered. Gently she stretched out her hand and moved and clicked the mouse so that the picture vanished from the screen. Then she shut down the computer.

He sat staring at the silent machine, the storm of his grief subsiding as she held him in her arms from behind. At last he stirred and turned to smile at her. ‘That was extraordinary,’ he said. ‘But why did you switch it off?’

She laughed. ‘I didn’t know the river with the willows,’ she said. ‘It must be something you remember from before we met. I suppose I was jealous, thinking you could grieve so much for the life you led then. Stop living in the past, my love! Now’s the time to be making memories we can share.’

‘But my darling,’ he said, and stood up, rubbing his eyes. The room was dark and empty, but when he ground the heels of his hands into his eyeballs the darkness was filled with sparks of light like tiny insects dancing.

A little later he went into the kitchen and made himself a pot of fresh coffee. Then he came back carrying a steaming, fragrant mug and turned on the computer again. ‘Memories we can share,’ he said, adjusting his glasses. He ran his eyes up and down the list of options, looking for a suitable search engine.