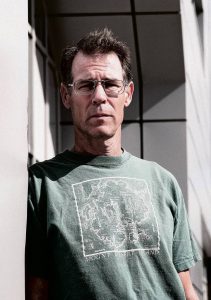 On Monday I’ll be going to listen to Kim Stanley Robinson when he speaks in the Glasgow University Chapel. In doing so I’ll be fulfilling one of my dreams as a graduate student. I was a passionate fan of Robinson’s books in the 1980s, especially his debut novel The Wild Shore (1984), set in a post-Apocalyptic America which has been effectively segregated from the world after an act of calamitous military aggression, and his haunting trilogy Icehenge (1984), made up of three novellas containing three distinct perspectives on a gigantic monument located at the North Pole of Pluto. I was excited by his story collection The Planet on the Table (1986), bowled over by its experimentalism and variousness; puzzled and delighted by The Memory of Whiteness (1985), in which a religious cult called the Grays tracks the movements of a celebrated blind musician as he tours the solar system with his hi-tech orchestra: a story that combines physics, music and space opera with a stylistic exuberance that still resonates in my memory. 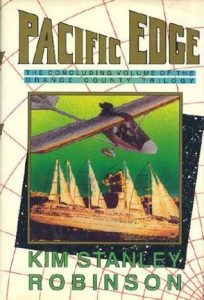 In 1989 I wrote a review of one of Robinson’s books, in a short-lived magazine called StarRoots edited by my friend the musician and writer Warren Scott-Morrow (aka Martin O’Cuthbert). I re-read the review today, and was surprised to find that it was of The Gold Coast (1988), the sequel to The Wild Shore and the second book in his Orange County trilogy (now known as the Three Californias trilogy – perhaps that was always its name). In my head the review had been of Pacific Edge (1990), the third book in that trilogy, probably because I liked that book far more: it remains for me the seminal example of how to invent an ecotopia, and an image from it – a hyper-modern sailing ship cutting through the waves of the Pacific, symbolic of the slower, quieter means of travel that need to be cultivated if ecocatastrophe is to be averted or reversed – still flashes into my mind whenever I think about the possibilities of a better tomorrow. I bought a mountain bike soon after reading Pacific Edge, and was always pleased that it was a Marin Muirwoods, designed and built on the West Coast and so potentially related to the mountain bike on which the protagonist of Robinson’s novel spends much of his time. 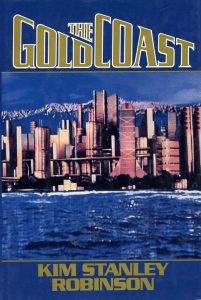 But in fact my review was of The Gold Coast, the second and bleakest in the trilogy, which depicts a near-future California riddled with corporate corruption, chained and bound by its freeways, utterly complicit with escalating global militarism – a miniature working model of capitalism in action as championed by the Republicans under the presidency of Ronald Reagan and the Conservatives under Margaret Thatcher. It’s a clumsy review, especially in its opening, which signals the fact that at the time (and ever since) I was obsessed with fantasy rather than science fiction, and hence with the past rather than the future – to the extent that my prose style was often contaminated with the Romantic flourishes of not very elevated high fantasy. My favourite SF writer was Ursula Le Guin, mainly because I thought of her SF as practically fantasy since I had come to her through the Earthsea books, and my enjoyment of Robinson can be measured by the fact that I thought him a potential successor to the woman who for me was the greatest living writer. His writing had an element of the magical in it, as embodied in the mysterious Grays in The Memory of Whiteness, and I was thrilled when he published a weird-ish fantasy novella called A Short Sharp Shock in 1990.

Another aspect of the clumsiness of my review is the absence from it of any mention of the indigenous people of the West Coast. This is ironic, given that Le Guin had recently published her own West Coast utopia, Always Coming Home (1985), modelled in part on the way of living of certain indigenous peoples such as the Yahi, about whose culture (now extinct) her mother had written a book, Ishi in Two Worlds (1961). My account of Robinson’s book is in fact largely unconscious of the questions of race and gender that have come to dominate my thinking in the decades since. 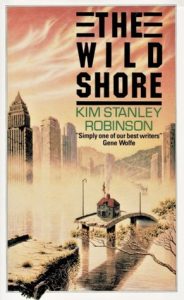 All the same, I’m going to place it on this blog as a kind of time capsule from the 1980s. It seems appropriate to do so because at the time of writing this was the kind of future the world was looking at, the kind of future it has in fact made for itself: something bleakly and appallingly different from the parallel futures represented in the first and last books of the Three Californias trilogy. In The Wild Shore America has ‘regressed’, thanks to its segregation, to a frontier world which is beautiful as well as mournfully conscious of lost possibilities in the past. In Pacific Edge those possibilities have been joyfully seized to create a world which coexists in conscious and careful harmony with the needs of the environment. In The Gold Coast the world is bent on self-destruction. We’re still faced with the question of which of these futures we wish to have; and it’s still clear that the course we’re bound on is the last. Let’s hope COP26, for which my home city Glasgow is preparing as I type, provides the impetus for changing that course at last, after all these decades.

The triumphal progress of Kim Stanley Robinson’s novels has produced a new wonder: the Gold Coast, set in Orange County a few years from now, the Autopia of suburban Los Angeles. Then, as now, the freeways rule, travelled by cars that follow tracks preprogrammed into their computers, as do most of their owners. For the novel’s protagonist Jim McPherson, Orange County represents ‘the end of history, its purest product’, the termination of man’s westward progress where the past has begun to pile up on itself as freeway is elevated above freeway, mall above mall. Robinson’s first novel, The Wild Shore, isolated California in political quarantine from the rest of the world; in The Gold Coast Los Angeles has become the world, and Jim finds Californian landscapes and burgers replicated in miniature throughout Europe. Somehow Robinson convinces us that to learn about Orange County is to discover ourselves.

Jim’s problems are an astonishingly accurate rendition of everyone’s problems, give immediacy by the present-tense narrative; he expresses them in clumsy phrases which contrast strongly with the stylistic exuberance of Robinson’s previous novel, The Memory of Whiteness. The Gold Coast traces Jim’s efforts to forge order from his emotional and ideological confusion. He writes poems which he then juggles into incoherence by randomly rearranging their lines with his computer; he engages in political activity which involves blowing up arms factories at night, an empty expression of his need to ‘do something’; and most satisfactorily for him, he writes a history of Orange County to explain how the web of freeways and malls came into being, a past-tense narrative that provides a lyrical counterpoint to his botched present-tense dealings with friends and family, an affirmation of the land’s enduring identity.

Other characters pursue their own quests for coherence. One of Jim’s friends is a paramedic who clears human debris from the freeways and so confronts the stripped bone beneath the tanned Californian flesh. Another is famous for parties where designer drugs impose a superficial stability on the riot of the emotions. Despite all the layers of concrete, of economic and political systems, at the core of the novel’s interwoven narratives lies the crude functioning of the human organism. Jim’s engineer father, who is engaged in advanced research for the Defence Industry (its red tape brilliantly evoked in a tangle of abbreviations), finds his most successful project hamstrung by a private squabble among the Air Force top brass. Jim’s idealistic sabotage turns out to be a cover for a stranger’s profitable drug-running. As always in Robinson’s work ideals are complicated by personal misunderstandings. In this The Gold Coast resembles The Wild Shore, and it proclaims this affinity. Underneath the concrete Orange County retains traces of the tiny community of the earlier work, as Jim shows his friends when they dig up the remains of an elementary school at the beginning of the book, in an act recalling the boys’ attempt to exhume twentieth-century affluence in The Wild Shore. The personification of the endlessly revitalised past in The Wild Shore, old Tom Barnard, reemerges in The Gold Coast as Jim’s indestructible Uncle Tom, still telling his stories despite being bedridden.

But a comparison with Robinson’s first work only underlines the new novel’s greatness. This is a mature and courageous celebration of a land’s influence on its people; of broken but enduring idealism and friendship; and on the crudest level of the body itself, as it surfs the night waves or hikes the mountains that have escaped the depredations of real estate. Robinson has emerged from his rewritings of future history to challenge us more forcefully by rewriting the present.