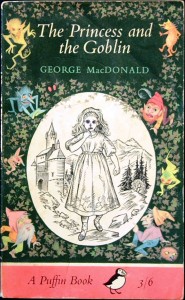 If ever there was a taproot text – in John Clute’s terms, a fantasy that branches out into a thousand other fantasies – this is it. From the moment when the Princess Irene runs off into the uninhabited regions of the ‘great old house’ she lives in – triggering memories of the exploration of the Professor’s house in The Lion, the Witch and the Wardrobe – the book rustles with the ghosts of books to come. The goblins of the title are precursors of Tolkien’s cheery goblins in The Hobbit, and of their nemesis, Gollum; the boy Curdie’s wanderings through the rocky labyrinth of the mines anticipate the astonishing journey through stone accomplished by Susan and Colin in The Weirdstone of Brisingamen; the songs Curdie sings to intimidate the goblins share their doggerel rhythms with the songs sung by the elves in the Last Homely House, later Rivendell; Irene’s old-young great great grandmother, whose light guides lonely wanderers on the mountainside to safety, is the forebear of Galadriel and Aslan; the faith of Irene and Curdie’s scepticism predict the games of faith and scepticism played out in Prince Caspian and The Voyage of the Dawn Treader. The butler serving the goblins wine in the king’s cellar conjures up the drunken butler of the King of the Wood-Elves, again in The Hobbit. The bizarre domestic animals of the goblins, with their distorted bodies and eerily human faces, conjure up the murderous sphinxes in Dave McKean’s movie Mirrormask or the tormented toys of Toy Story. And in its meditations on class the book as a whole reads like a direct source of Wells’s The Time Machine, where the wealthy have become effete, mindless children and the working classes cannibalistic cave dwellers. But MacDonald’s morals are more sophisticated than those of most of his successors. His fairy tale is designed to shame his readers into rethinking their assumptions about class, race and gender, yet one always gets the sense that he includes himself in the ranks of those who need shaming. He doesn’t stand on an eminence dispensing wisdom to less enlightened inferiors; he shares the wisdom he’s been given by women – always women – wiser than himself.

The moral complexity of his book is clear from the moment he tells us about the goblins’ origins. These are not creatures who have been the way they are since the dawn of time; they are products of the Darwinian age, unlike Tolkien’s orcs but very much like Gollum. ‘There was a legend current in the country that at one time they lived above ground, and were very like other people. But for some reason or other, concerning which there were different legendary theories, the king had laid what they thought too severe taxes upon them, or had begun to treat them with more severity, in some way or other, and impose stricter laws; and the consequence was that they had all disappeared from the face of the country’. The goblins hold a very reasonable grudge against the descendants of those who ‘caused their expulsion’ from ‘their former possessions’. And they continue to evolve as the book goes on, beginning as comic weaklings, and growing increasingly menacing as their revenge matures towards fruition. Things don’t stay stable in MacDonald’s world, and the most unsettling thing about this instability is that his grotesque antagonists are so closely allied – physically, mentally, geographically – to his heroines and heroes.

The Goblins’ plot to seize the house where Irene lives is a plot to recover their own. Their desire to abduct Irene is a violent expression of the desire to reunite two communities that were violently separated. Humans made the goblins, and the proximity between the two species seems to be confirmed by Curdie’s obsession with them, and by the fact that his guiding thread at one point leads him straight into the arms of the goblin royal family. Even their distorted animals are terrifying because of their parodic humanity: ‘what increased [their] gruesomeness was that, from constant domestic, or indeed rather family association with the goblins, their countenances had grown in grotesque resemblance to the human’. MacDonald hints here that there has been interbreeding between goblins and animals, as we know there has been between humans and goblins (that’s why the goblin Queen has toes). In his post-Darwinian universe the grand hierarchy of species – the Great Chain of Being – no longer exists, and anyone can become anyone or anything else, given time, habit and inclination.

The structure of the book reinforces this idea of the potential for slippage between one condition and another. There are three principal families in the book: the princess’s dysfunctional family, in which the father is mostly absent and the mother dead; Curdie’s family, whose male members labour underground or work secretly after working hours to expose the plots of the goblins; and the goblin royal family. All three families are dominated by their women: the great great grandmother who watches over Irene; Curdie’s mother, who seems in effect to be the great great grandmother’s younger sibling; and the goblin Queen, who conspires to overthrow the other two families while concealing their close family resemblance by hiding her human toes inside a pair of granite shoes. Threads link the families: the cord or ‘clue’ Curdie uses to find his way to and from the maze of tunnels bored by the goblins, and which leads him to them time and again; the magical thread spun by Irene’s great great grandmother, which leads her first to Curdie and later to Curdie’s mother. The threads insist on the links that bind princess to miner, miner to goblin, goblin to princess.

The ruling classes and their servants struggle to contain the younger generation, twelve-year-old Curdie and eight-year-old Irene, in the places to which their class and age should properly restrict them. Irene is confined to her bed, Curdie cooped up in the mine, or in a locked room in the great house where the princess lives, or in a hole in the goblin palace. (The great house and the goblin palace don’t treat him very differently – he’s even shot by the princess’s guard, who think at first he’s a goblin, then a thief, unable to rid their minds of settled assumptions about the habits and intentions of the poor). The same urge to cabin, crib and confine – on the part of others, on the part of themselves – is what twisted the goblins’ bodies and minds into ‘gruesomeness’. But Curdie and Irene resist enclosure, running up and down the mountainside, scurrying through tunnels, staying up all night, making friends with unsuitable strangers. And in the end their energy breaks down the artificial barriers that divide the kingdom. Irene is found by Curdie in his mother’s arms; Curdie is invited by Irene’s father to share a communal meal in the great house, with the other miners, like long-lost relatives. By this time the nature of class has already been questioned by the narrator, who insists that ‘there is some ground for supposing that Curdie was not a miner only, but a prince as well’; just as the princess is, for Curdie’s mother, ‘a good girl […] and that’s more than being a princess’.

The book ends with a deluge which underscores the point. Curdie and Irene live in a seemingly solid landscape – the most solid imaginable, a land of mountains. But under and through and across the mountains, water flows. It menaces the miners, sustains the gardens of the great house, and forms an essential part of the goblins’ plots against their former rulers, as if the water were somehow an expression of the class system. But at the climax of the novel, when the goblins unleash what is intended to be a watery vengeance on the humans, the flood goes awry thanks to the miners’ intervention. Instead of overwhelming the mines as the goblins had hoped, the floodwaters sweep through their own tunnels – exposing their kinship to the miners in the process, as they are drowned by the very same element which is most feared by their fellow stone-workers. But the water also bursts out of crevices in the mountainside, and threatens to overwhelm both the miner’s cottage where Curdie lives and the great house of the princess. Both these structures are buildings, so both are vulnerable to the same physical threat to their foundations. The members of the princess’s household seek refuge with the miners’ families; and later it’s the miners who drain the great house so they can go home. When the house is drained it turns out to be full of goblin corpses, the symbolic remains of a rigid class system that has now (perhaps) been overthrown. The feast thrown for the miners by the King announces a new entente cordiale between the workers and the ruling classes, whereby both are respected by their opposite numbers and all deserving citizens are assumed to have princely blood.

But MacDonald doesn’t leave the goblins rigid and unchanging. The surviving goblins undergo another metamorphosis: ‘Their skulls became softer as well as their hearts, and their feet grew harder, and by degrees they became friendly with the inhabitants of the mountain and even the miners’. This process turns them into people ‘very much like the Scotch Brownies’; so they end the book as Scots, just like MacDonald. It’s typical of MacDonald to acknowledge his own kinship with the antagonist-victims of his narrative.

Fluid identities, then, are key to this book, as they were to Phantastes. And the most fluid of identities in the book belong to the women. Irene’s great great grandmother and Curdie’s mother don’t seem to be restricted to the class or time into which they were born. They aren’t rigid in their judgements of others. They don’t bully or patronize the children in their care when they fail to follow instructions. But they’re also concealed from sight, as if in acknowledgement that MacDonald’s culture wasn’t yet ready to accommodate them. The great great grandmother stays hidden in the attic, and cannot be seen even by Curdie until he too has learned to cultivate the flexibility she embodies – no other man sees her, except the King on one occasion. The mother stays hidden in the cottage. In the book’s final chapters it’s Curdie who is most active, plunging through flooded rivers, carrying Irene to safety, and riding the King’s own charger in a successful mission to save some horses from a flooded stable. It’s a reversal of the usual class structures of Victorian romance, but not of the gender structures that were challenged earlier in the novel – as when the Princess rescued Curdie from the goblin dungeon. MacDonald was a visionary and a radical; but he was not so much of a fantasist as all that.

2 thoughts on “George MacDonald, The Princess and the Goblin (1872)”