[The sixth blog post from the Glasgow Symposium on Fantasy and the Fantastic is by Noel Chidwick, Co-founder, Editor-in-Chief and Editor of the Edinburgh-based magazine and hub of wider SFF activities Shoreline of Infinity (editor@shorelineofinfinity.com, www.shorelineofinfinity.com). Thanks to him for supplying a post that opens up the discussion to wider horizons…] 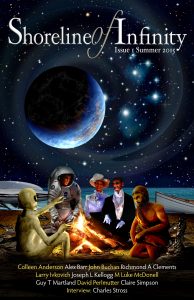 The Centre for Fantasy and the Fantastic is an exciting prospect, and as editor of Shoreline of Infinity SF magazine, it was a privilege to be involved in the Symposium and present our case. 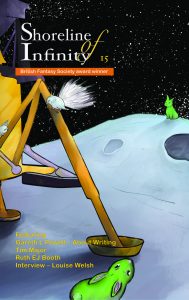 Why Create a Science Fiction Magazine?

I’ve been a voracious reader and occasional writer of SF and fantasy since I was knee-high to an android goblin, and I’m partial to short fiction.

There really was only one science fiction magazine in the UK of note: Interzone. I’ve been a subscriber since it started, but when I read one issue I realised that all its story writers were from the USA.

In Scotland there had not been a science fiction magazine since Spectrum in 2003.

So where do UK science fiction writers submit their stories? Where do I get my fix of British short SF?

Shoreline of Infinity Science Fiction magazine began as an idea in Autumn 2014 when my co-founder Mark Toner and I mulled over this question.

We first met and became friends in the 1980s as astronomy postgrads at the Royal Observatory in Edinburgh, before we both moved into teaching in Further Education and building families. Since then, we have both built up a collection of skills, knowledge and interest to the point where we decided a science fiction magazine was the thing to do. Our children had moved on, we even had some time. The Nine Realms had converged.

We did some research, and we contacted a whole range of people – other SF readers, friends, writers, artists, bookshop owners – to see if our idea was worth pursuing, would anyone be interested in writing for it, reading it?

Oh yes, we were told.

We did the sums. We could fund it ourselves to get it started. We had the technical skills, so we built a website. I’ve co-edited a fanzine, a folk magazine and was a partner in a music indie press and I also taught graphic design and typesetting, so the editing was covered. Mark had become an artist and comic creator, so the artwork was covered.

What would our focus be? The title, Shoreline of Infinity, is perfect. It encapsulates exactly where the human race is: we’ve sauntered down to the beach, and now we’re peering out into the infinite and we’re wondering where the heck we go now – ideal fodder to feed the science fiction mind.

And we agreed, writers and artists must be paid. We could not pay pro rates, but we could pay something. 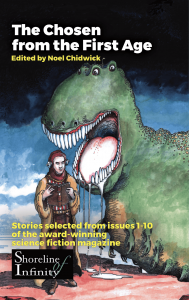 This was every bit as important to us. Scotland is an outward reaching country, and a warm welcoming country. I can attest to the latter: I’ve lived here happily for 38 years.

The magazine must reflect that. We wanted writers from all over the world, both new and more well-known, and we wanted to make sure that Scottish writers were also well represented. We created a section of the magazine called SF Caledonia, where we explore the history of Scottish SF. I met up with journalist and writer Paul Cockburn, and he led me to a short SF story by John Buchan of all people. Meeting Paul over a green tea was one of the first of many meetings with a range of fascinating people who helped us on our way.

We opened for submissions in January 2015. Nothing happened for a week. Then we received our first story, Clean up on Deck Seven by Claire Simpson. We loved it. We relaxed slightly.

We contacted publishers who were more than obliging in sending us books for review. Charles Stross agreed to do an interview.

Our confidence grew. Mark put out a call for artists, and work began on illustrating the stories. Word got round: our Twitter and Facebook followers increased. We began to receive emails asking: can I help? Folk offered their copy editing skills. Monica Burns, a postgrad student, joined us as an artist who also had copy editing skills and an interest in historical Scottish SF – Monica was appointed as SF Caledonia editor. And along came Russell Jones, who joined us as as we were putting Issue 1 together. He helped us with story selection and editing. He was the first SF Poet I have met, and so he became Poetry Editor, and Multiverse – our SF poetry section – began in Issue 2. We found a Reviews Editor in Iain Maloney – a Scottish writer living in Japan. I ‘interviewed’ him over Skype one evening, and he was as delighted to join us as I was for him to become one of the Shoreline team.

As we approached publication day in July 2015 Russell asked what our plans were for launching Shoreline of Infinity. We hadn’t thought much about that: back room of a pub?

Russell took control. He booked a suitably atmospheric venue, Paradise Palms, and pulled in some of his performance poet chums and an actor, Debbie Cannon, to read a story from Issue 1. Mark and I play in a prog-folk band with a  catalogue of SF songs, so we provided the music. Russell decided to be an alien.

We had a great night, sold some magazines, but the main question was: when was the next event?

In just nine months we had moved from an idea shared by a couple of friends looking for a new challenge in life, to a room full of excited SF fans wanting more. 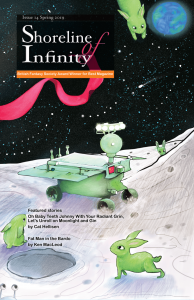 Shoreline of Infinity is read world wide. Although we still need to work on our readership numbers, it has attracted the award last year from the British Fantasy Society for best periodical, so we must be doing something right.

Our greatest achievement is the people who have joined us from far and wide to help us with the magazine and our other projects, and who volunteer their time and skills to help produce it.

This great bunch of folk have already created a lot under the Shoreline of Infinity umbrella. So far we have produced:

15 issues of the magazine

Infinitesimals: audio dramas scripted performed and recorded  from the original stories published in Shoreline of Infinity. Infinitesimals is headed up by Jonathan Whiteside and Debbie Cannon, and supported by a wonderful cast of Edinburgh actors.

Soundwave: our stunning new podcast, of readings, dramas, music and interviews. RJ Bayley joined us to produce and host this.

And we’re told we are one of the reasons why we have Scotland’s first sf, fantasy and horror festival of writing, Cymera, taking place in a month’s time.

Currently, we are working on building the Shoreline of Infinity Group. This is a cooperative for creatives who want to deploy Science Fiction and Fantasy to tell their stories in their chosen art forms. The idea is for them to work together to support each other’s projects either for themselves or under the banner of Shoreline of Infinity.

We began with just the idea of a quarterly SF magazine. Now we are talking on the Janice Forsyth show (okay, once) and last week we held a science fiction art exhibition at the Scottish Parliament with the aim of raising the profile of science fiction in Scotland.

Scotland’s roots are buried deep in its history, in its mythologies and in its stories. Scotland also has its eyes on the future: not one, but two proposed spaceports. We’re finally looking beyond the shoreline of infinity.

The Centre for Fantasy and the Fantastic is proposing to combine research with reaching out to the creative community. Hopefully Shoreline of Infinity can play a part working with the Centre to help connect with the wider world. 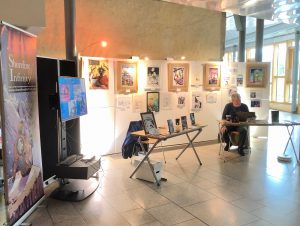