[The three short stories with the title The Dark Tower stem from a lifetime’s obsession with the old fairy tale about Childe Roland and Burd Helen, as related by Joseph Jacobs in his influential collection English Fairy Tales (despite the fact that the source of his story was Scottish), mentioned briefly by poor Tom in Shakespeare’s King Lear, and most memorably retold by Robert Browning in his great poem Childe Roland to the Dark Tower Came. The story gives the best illustration I know of the deeply disturbing strangeness of fairy lore, and I’ve tried to capture both those crucial aspects of it in all three of my variations on the Dark Tower theme. The second variation can be found here, the third and last one here.] 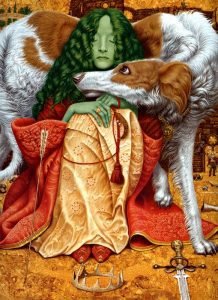 Roland lowered the slug-horn from his lips. The echoes from its blast were still bouncing off the steep slopes of the surrounding mountains as he took a double-handed grip on the sword that was much too heavy for him and braced himself to strike for one last time.

The thump of footsteps sounded from inside the cavernous entrance to the Dark Tower. He watched as the bare white feet came hurrying towards him. He could not bear to look at her face. If he looked at her face, as his brothers had, he would never be able to do what he had to do.

Already she was standing in front of him, chest heaving from her running, air spilling out of her mouth to warm his cheeks. ‘You came!’ she cried. ‘I knew you would! I knew –’

He took a tighter grip of the hilt of the sword and raised it with an effort. He had done this so many times in the last few hours that every joint in his arms and shoulders screamed in pain. He must look her in the eye before he struck the fatal blow; if he didn’t he couldn’t be sure it would be a clean one. He lifted his eyes. He held her gaze. He saw her expression of joy fade to puzzlement, then to alarm as the blade began its slow descent.

‘What – ’ she said, and then the thud came, followed by the spray of blood, which drenched him from head to foot as she toppled towards him.

Gasping, he lent on the blade and waited for the miracle to happen.

He did not look at her body. He wasn’t sure what the process of regeneration would entail: whether the head would come crawling across the pebbles on sinewy feet, or whether it would bounce like Ellen’s ball toward the severed neck, still pumping out blood in a diminishing stream; and by what strange form of alchemical or vegetable fusing the separate strands and bones of the head and neck would knit themselves together. He didn’t want to know. The outcome was all that mattered: regeneration, the return of movement, jerky at first, then smooth. The sound of her voice, bubbling at first in the blood-choked windpipe, then spilling forth clear and loud as it did before.

He didn’t look. He waited, leaning on his sword, watching the crimson pool of blood as it spread towards his feet, feeling the blood drip from his nose and chin, noting how the landscape all round the Tower was stained as if with blood by the setting sun.

It had been a long day.

Someone coughed behind him.

‘So you did it,’ a voice remarked. ‘You followed my instructions. I’m amazed.’

Slowly he turned his head. The old man stood there, as he had before, his crooked hands still resting on the handle of his stick in exactly the pose Roland had adopted after striking off his sister’s head.

‘Amazed, and impressed,’ the old man went on. ‘Your older brothers could not do it. That’s why they died. This is a land where instructions must be followed to the letter, and failing to follow them is always fatal. Well done, my child. Well done indeed.’ And he smiled as he turned to leave.

‘Wait,’ Roland cried, with a final effort. ‘It’s not over yet. Ellen – she needs to come back with me. That was the deal!’

The old man stopped, turned, raised an eyebrow. ‘That was the deal?’ he repeated. ‘How so?’

‘That was the deal,’ Roland said again, and felt a flush creep across his face in spite of the cold. ‘“When you come to Elfland, you must cut off the head of everyone you meet. Everyone, you hear? Man, woman and child. Do this and your quest will be successful. Fail to do it and you will die.” That’s what you said when I saw you before, on the Blasted Heath.’

The old man nodded. ‘Why yes, that’s what I said. “Do this and your quest will be successful.” And so it has. You’re alive, child, aren’t you? Your bones are not lying with the bones of your older brothers in the ashpit yonder?’

Roland turned to peer where the old man’s finger pointed, then wished he hadn’t. He felt sick and shaky. He dropped the sword and ran his hands through his blood-roped hair.

‘Is dead,’ the old man said, with a touch of weariness. ‘You killed her, child. Look where she lies. How can she possibly come back with you now?’

A bird flapped suddenly on a nearby rock, and the noise drew Roland’s attention so that his eyes flicked to one side. When they flicked back again the old man had disappeared.

The mountains had lost their redness. They were now the colour of rock, like the Tower, the sky, and Roland’s hands. The bird gave a harsh despairing cry and took off, flapping in a zigzag path towards the nearest peak.

Roland picked up the sword and stumbled after it. 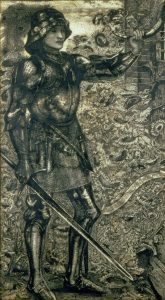 [The second variation can be found here. The third and final variation is here.]